The River Saraswati and the Aryan Debate 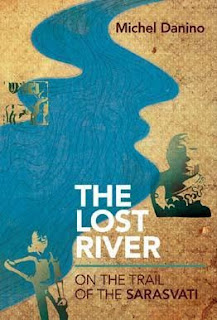 Michel Danino who is by birth a Frenchman, but has lived in India for more than 25 years has written a marvelous book on the River Saraswati. This river was mentioned in the Rig Veda as the most important of rivers, a mighty river with grassy banks on whose shore the Vedic Rishis wrote the hymns that are universally accepted to be some of the most sublime philosophy ever written.
The geography of the region that they lived in was well described. The Nadistuti Sukta, a hymn in praise of rivers enumerates 19 rivers which were of importance in the Vedic world. From east to west they were enumerated as the Ganges, Yamuna, Saraswati, Shatudru (Sutlej), Parushni ( Ravi) Asikni ( Chenab) Vitasta ( Jhelum) and so on. All the other rivers have been identified, but the Saraswati remained an enigma.
However as Danino shows in his marvelous book published last year by Penguin India, the Saraswati had been identified with the Ghaggar system long ago, when the first British administrators came to this area in the early 19th century. They recognized that a large river, whose bed was easily visualized, flowed through what is now desert. The river bed was so wide that it could accommodate “fifty camels walking side by side” as one of them put it. Later research , including satellite mapping showed that there were channels which connected The Sutlej and Yamuna with this river system and that that a cataclysmic event shifted the Yamuna to the East to join the Ganga and the Sutlej to the Beas, thereby causing the Ghaggar system to lose most of its waters and finally to dry up.
Danino has showed the evidence which appears to me to be quite plain. There is much evidence from the satellite pictures, geology, from archeology, folk memories and so on to show that there was indeed a mighty river that nourished a civilization on its banks from about 8-000 BC to around 3000BC. This civilization was the Indus Valley civilization which went through several phases, finally ending somewhere around 1500BC. The evidence shows that while in the early phase ( when the river was full ) there were large numbers of cities on its banks, they became less and less in the later phases as the river dried up.
The conventional wisdom is that this was followed by the Aryan invasion which was the Vedic Civilization, mainly rural in character and very different from the mainly urban, well developed and peaceful civilization of the Harappans. The Vedic people, as evidenced from the hymns were illiterate, warlike, and mainly pastoral in character. Unfortunately there is a problem here. The Rig Veda describes the Saraswati as a mighty river and many of its hymns suggest that it flowed from the Himalayas to the sea during the Vedic age. As late as the Mahabharata episode, the Saraswati is described as a living river on the banks of which Duryodhona and Bhim fought their last grim battle. The only way that this can be reconciled with the archeological and other evidence is to push the Vedic age to 3000 BC which conflicts with the Aryan invasion theory. However as Danino shows, the evidence is compelling to show that the urban civilization and the Vedic civilization were not, as thought earlier, the products of two separate peoples, but a part of the continuum of Indian History and civilization.
This is not to deny that there is much to be said for the theory that Saraswati was not necessarily this river (the Ghaggar ) ; there is some pretty good evidence on the opposite side as well and this has led to an unfinished debate on the origins of the Aryans and the true connection between the Vedic and Harappan civilizations.
The unfortunate fact is that this debate has now been hijacked by the proponents and opponents of the Hindutva movement. Many historians have allowed their ideology to affect their judgment and this leaves ordinary readers like me in a dilemma. What is one to think if someone like Romila Thapar actively debunks the theory that the Ghaggar system was indeed the Saraswati? And for that matter the venerable Irfan Habib who has written a well argued diatribe against this theory. One is always wary of the Hindutva gang, but to a layperson (a dispassionate member of the jury if you like), the evidence does seem compelling. That the Saraswati River, or at least a major river did flow in this region is now more or less settled. The implications for the Aryan invasion debate have yet to be decided.
I would recommend this book to anybody who has an interest in the history of India. Well written and compellingly argued, I must say that I find his viewpoint pretty acceptable. And with recent genetic evidence suggesting that rather than Aryans entering this country, Central Asia was peopled from South Asia, this debate seems to be poised for a definitive conclusion. Great reading!
Aryans Book review Saraswati