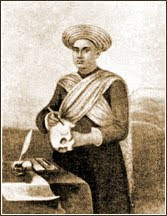 
I recently came across a copy of the Annual Report of the Medical College for the year 1844-45, that is 160 years ago. It was an interesting read and there is much that strikes a chord even today. The report was authored by Dr Mouat who was the Secretary of the college as well as the Professor of Materia Medica and Medical Jurisprudence. The term Materia Medica has now completely been replaced by Pharmacology, but even in our student days there were some senior teachers who still used to use the terminology. At that time there were 9 teachers in the main Instructive section as it was then called. They were Dr Wallich, Dr Jackson, Dr Pearson, Dr O’ Saughnessy ( in whose name the Chemistry medal was still being awarded in our student days), Dr Mouat, Dr Webb , Dr Robertson and of course Madhusudhan Gupta, the first Hindu to dissect human bodies and who is immortalized in a plaque in the Anatomy Lecture Theatre to this day. There were two other Indians in the staff. One was Dr Prasanna Kumar Mitra who was the resident surgeon of the Lying In Hospital ( the forerunner of the Eden Hospital) and incidentally was the favourite student of David Hare and who attended to him during his fatal illness in 1842 ( Hare died of Cholera). Mitra was the father of the famous disciple of Ramakrishna who was known as Yogin Ma ( Yogindra Mohini Mitra). The other was Babu Doyal Chand Basak who has been listed as pupil in the lying in hospital. This meant that he was the Midwifery Scholarship Holder, the forerunner of the present Goodeve Scholar. ( It is amusing to remember that in our year, Dr Subhankar Chowdhury , now Calcutta’s leading endocrinologist was the Goodeve scholar and spent a couple of weeks in the room allotted to him on the first floor, near the operating rooms as one of the conditions of the prize. A less probable gynaecologist I have never seen!)
That year there were 91 students in the Primary class, of whom 57 were Hindus , including 19 Brahmins. Muslims were only 3, the rest being made up of Christians and Ceylonese , presumably they were Buddhists. The Military class however had a large number of Muslims (75) of whom all but 14 were from the North West Frontier Provinces. The rest of the students (15) were Hindus making up a total complement of 90 students.
The report lamented the death of Mr Griffith who died the previous year. He was the Professor of Botany and who, in addition to his teaching duties was preparing a Manual of Botany which would now , the report lamented, remain incomplete. This was also the year that Dr Goodeve (of the Goodeve scholarship mentioned earlier) left the college. Henry Goodeve had been associated with the College since its inception. He was a well known physician who had written and published widely and it was during this return to England that he took with him the famous four: Bholanath Bose from Barrackpore who was considered to be the most promising pupil of the college, Gopal Chandra Seal, Dwarkanath Bose and Surjya Chakrabarti from Comilla. If I am not mistaken, this last named later converted to Christianity during his stay in England and took the Christian name of Goodeve in tribute to his teacher. The stay of these students was sponsored by Dwarkanath Tagore, the grandfather of the poet who paid Rs 7000 for each student, a truly magnificent sum in those days.
There are some other interesting nuggets of information. At that time there were two hospitals attached to the college. One was the General Hospital with 112 beds and there was another Female Hospital with lying in beds ( i.e. Obstetric) with 60 beds. The Anatomy and Pathological Museum at that time had 875 specimens and the library was in the proud possession of 3612 volumes. There was mention of the latest up to date cabinets being imported from Europe to house these volumes in style. The anatomy dissection hall was very active indeed. Registers were available from 1837 and during this time, 2316 bodies had been dissected. The maximum number was in 1843 with 544 bodies. 100 years later, the anatomy dissections halls were again full, this time with the unclaimed bodies of the Bengal famine of 1943.
There were a lot of suggestions to the Government to modernize the teaching staff and to stop the practice of one professor heading several departments. The rationalization of the teaching staff was also suggested as well as abolition of unnecessary posts such as that of the Lecturer in Minor Surgery. The college calendar was also reformed and from this time onwards, the session was to start on June 15th and teaching would continue up to March 15 and after one month given over to examinations, the session would end on April the 15th. There were some sample question papers as well and I would like to end by quoting some of the questions that were asked in the final exams of that year.
1 Detail the Symptoms of a strangulated Inguinal hernia- the methods you would employ for its reduction, and if they were unsuccessful, at what period and under what circumstances would you proceed to the operation. Describe the mode of operating and give the subsequent management of the patient, according to the various conditions of the contents of the hernia sac.
2 Enumerate the symptoms and postmortem appearances generally found in acute dysentery. Mention the different modes of treatment adopted in the different stages of the disease- the cases in which mercurial preparations are contraindicated-when and under what circumstances would you employ general blood letting and you reasons for preferring one system of treatment to another.
Calcutta history Medical College

sohini said…
That was a wonderful write up. I am writing about the History of CMC, unfortunately the primaary sources are rare. Can you tell me from where did you get the Annual Report of 1844?
November 1, 2011 at 1:33 AM

way2 college said…
NICE BLOG!!! Medical tutoring is tutoring related to the carry out of being a medical practitioner, or healthcare related providers either the initial training to become a physician. Thanks for sharing a nice information.
Top MBA Colleges in Chennai
MBA colleges in Chennai

Nimisha said…
Pharmacy courses in India is opted by many students these days. There are many Top Pharmacy Colleges in Pune that offer the Pharmacy Courses at both undergraduate and postgraduate level
March 11, 2014 at 7:16 PM

Priyatamil said…
I think it's awesome someone is finally taking notice of our vet's and doing something to help them. I hope all goes well with these articles. More new information i will get after refer that post.
PTE Coaching in Chennai
February 28, 2017 at 6:08 PM