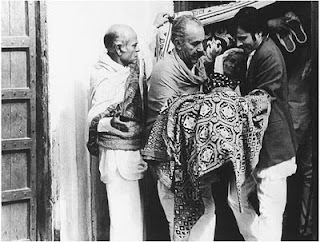 One of the enduring tragedies of India is the lack of understanding of the different cultures and religions that make up its mosaic. There is an unfortunate lack of knowledge about the cultures of different states, of different linguistic groups and most of all of differing religious groups. One of the most mysterious and unknown groups for the Hindu community among the different religious groups are the Muslims. Despite the fact that they make up about 20 % of India’s population and about 30% in West Bengal, the knowledge of their customs, thinking and fears are often totally a totally unknown quality to many Hindus. This is a tragicomic situation, unfortunately more tragic than comic.
Even for the well meaning and secular person, the other community is a blank and one really does not know what strikes a chord, and what does not, whether at all the community is as monolithic as it seems. One important means of bridging these divides has to be literature and the arts. Speaking for myself, one movie and one novel brought me an understanding of the Indian Muslim community that many rational discussions would never have. This is not to say that I understand, or even sympathise always with the ideas of the Indian Muslim people, but at least I think I can understand what makes them feel that way.
As I was saying one movie and one novel was what opened my eyes to a world that was to some extent unknown to me. The first was a movie made in 1973, when I was still in school. Directed by M S Sathyu, who was, with Shyam Benegal, the first movers in the New Wave of Hindi films, this movie was based loosely on an unpublished short story written by Ismat Chughtai. A Muslim Family from Agra, who were in the shoe making business, were now facing the gravest crisis of their lives. Would they move to Pakistan, their promised homeland, or would they stick to this land, now a “foreign” land where they were born and had grown up and which had been their homeland for who knew how many generations? The movie, for the first time, to my knowledge, brought an ordinary Muslim family to the screen. Without the exaggerated secularism of commercial Hindi movies, Sathyu showed what life was like for them, what their concerns were and their fears and desires in a way that moved one to tears. There was a scene where the family is forced to move from their old haveli to a new accommodation and at the last moment, the grandmother cannot be found. She is later found, hiding in the chicken coop if I remember right, refusing to leave the house of her forefathers. How then, the unspoken question was, could they move to a new country? There was another memorable scene where a former Muslim Leaguer, who was very active in the Pakistan movement, suddenly shows up in a Gandhi cap, having effortlessly switched his allegiance to the Congress party rather that face the displacement that he made necessary for so many millions. In the end, the family, defeated in their struggle for survival decides to move to Pakistan, but on the way the patriarch of the family, played superbly by Balraj Sahani, decides to stay and fight for his rights instead. This is without doubt one of the best Hindi movies ever made.
Another creation, this time a novel, had the same effect. I read it more recently when secularism had become a dirty word and Modi is the hero of the majority of India’s youth (or so it would seem to read the cyberwaves). This novel was written by Nazrul Islam, not the rebel poet, but an IPS officer. I am proud to say that he hails from the same district that I come from, not that I have ever lived there ever! The novel does not reach very high literary standards, but it is heart wrenching and inspiring story of a Muslim Bengali boy, bought up in a cultivator’s family who fights against the odds to reach his goals. It is obviously a thinly disguised autobiography. The author has shown how it feels to be a Muslim in a world of majority Hindus, he has also clearly demonstrated how educated Muslim youth do not hesitate to ask questions of their religion and shattered many other myths that are current. This book, Bhumiputra (Son of the Soil) has been translated into (atrocious) English and is now accessible to Indians who do not understand Bengali. However, as I said, the book is important, not for its literary merit, but for its dissection of the Indian Muslim mind. I must say that it was a great eye opener.
I would recommend these two pieces of Art to all who would like to understand the Indian Muslim. It would be difficult for anybody to remain a bigot after reading this book or watching the movie. Perhaps they should be made compulsory reading and watching for senior school and University students. At least it would rid us of the US and Them attitude that still unfortunately vitiates public life, 60+ years after independence.
Indian Muslim