Of Anna Hazare and Sundry Other Gandhians 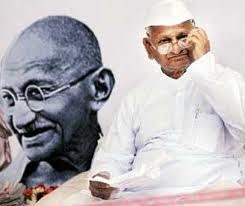 Gandhians leave me cold. One possible reason for this is the essential hypocrisy that masks their actions. Gandhi himself was a dictator and singularly intolerant of differing views. He knew best and woe betide Bhagat Singh, Rajguru or Subhas Bose if they refused to fall in line. Nothing that unusual about this, most leaders tend to think they know best and sometimes they do! However what I object to is Gandhi’s sanctimonious behavior in letting loose his minions to undercut and destroy his opponents while he himself pretended to be above all this political machinations stuff.
Subsequent Gandhians have had all his failings without any of his redeeming features. Take Morarji Desai for instance. This gentleman, despite glaring proof that his prohibition policy was a complete failure in the erstwhile Bombay State persisted in it giving rise to a culture of law disobedience that had disastrous results. And even so, would he admit being in the wrong? God forbid, a Gandhian could never be wrong!! His subsequent shenanigans as the Prime Minister are still green in the memories of those of our generation. Suffice it to say, that his principal contribution to the polity was to promote the use of urine drinking as a panacea to all ills.
Jayprakash Narayan was another one. In some ways, his endeavours were a lot like Anna Hazare’s After the Opposition lost the elections in 1972, he came forth to challenge the elected governments and started a culture of mindless street protest that has been the bane of the Hindi heartland ever since. He spawned Laloo Yadav and I think that says it all. His principal achievement was to show us the hypocrisy of the Gandhian fighters against Indira Gandhi’s emergency for what they were: power hungry men of straw.
Vinoba Bhave, on the other hand, was the Sarkari Gandhian. He could be relied upon to support the emergency, and all other misdeeds of the ruling Congress party. His semantic contortions in support of Mrs Gandhi during the emergency can still bring a smile to even hardened skeptics like me.
And now we have Anna Hazare. Known for running a semi fascist feudalism in his home Taluka, where he has people disagreeing with his prohibition and other policies beaten up while maintaining a beatific and distant smile on his face, ( in this he is a true Gandhian, a real chip off the Mahatma block), he has now appointed himself as the guardian of public morals in India. Not to say that something was not needed. But as I said, I am skeptical of Gandhian activities by nature. And true to form, I got a mail from an acquaintance of mine, belonging to the trading community, who is organizing a morcha in his favour in Siliguri. This gentleman is well known for his corrupt business practices and has skirted the law on many occasions with the help of his political connections, is today decrying corruption. Some of my doctor friends who think nothing of accepting bribes from pharma companies to prescribe drugs are in the same boat. They are going to fight corruption with Anna Hazare!
The problem, of course, is with the government. As I had said in an earlier post, Manmohan Singh needs to retire. If the crown prince is not yet ready to take over, maybe he can give Pranab Mukherjee a chance. He deserves it fully poor fellow. As it is he does most of the work that the Prime Minister should be doing. His latest tough man act in arresting Hazare and then pitifully negotiating terms with him has made him, justifiably, a laughing stock. What prevents him from taking some action on the issue of corruption? If it is Sonia Gandhi’s political compulsions that are staying his hand, he should have the guts to come out and say so. If that is the case and he is silent, he is as corrupt as anybody else.
The problem of corruption is a huge issue. However the middle class in their fit of morality has not thought it proper to assess their contribution to this. If they are willing to take bribes (and every middle class person barring only a miniscule few is willing to do so if they have the chance), on what grace do they accuse the political class? It is time, I think, to remove the mote from one’s own eye. Stop bribing, stop taking bribes, including dowries, one of the worst form of bribes possible. Then come out in the streets to oppose corruption. Until then Just shut up and that is what they are going to do anyway if the government really gets tough by using tear gas and an occasional firing as it would have done long ago if the protesters belonged to the underclass.
And the final word is to the Good Doctor, Manmohanji, let’s go home. It has been a good innings. We are grateful for many things, but you have now long overstayed your welcome.

Anonymous said…
Compliments on a very well-written, hardhitting commentary, and an introspective look at our own ethics. No human is perfect on all counts, and anybody, regardless of their other faults, who takes a stab, however small, at corruption, has my respect (to include You). The disease of corruption is so known, the solution, alas, is so hard. Asish Chatterjee
August 19, 2011 at 9:11 AM

Anonymous said…
Nice, Apu. Definitely enjoyed reading your well-written perspective. I guess we are all hypocrites in that we are probably more ready to judge others than ourselves :-). And this perhaps because I'm not so in-tune with Indian politics, but ...if the government is the problem, why should Singh retire? Did you mean resign? And your quip about Pranab Mukherjee....isn't he the one who's been around for ages? I take it that you are joking about giving him a chance to be PM cuz. you put him down in the next sentence. But I do agree wholeheartedly with your main conclusion in that if youthat if you don't like corruption, then stop giving or taking bribes of any kind. Ananth Seetharaman
August 19, 2011 at 9:13 AM

Anonymous said…
Yes yes yes! The socially aware in Kolkata have suddenly decided the cause is not as fashinable as they thought so there were precisely 6 people in a huge decorated pandal in Dalhousie where a lone guy wearing a Gandhian topi was trying to take signatures! Deepa
August 20, 2011 at 10:06 AM

Anonymous said…
Hi, nice commentary. Excess of anything is poision. Corruption can never be eradicated. The issue now is of excess corruption. 64 cr bofors issue was enough for fall of Rajiv Gandhi Govt. But scams in lacs of crores today has made corrupted people more powerful so that they can fight and rule over 125 crores on the other hand. Today's fight is not for Anna, but it is start of battle between few hundred rulers and 125 cr ruled. Let's not be very pessimistic: Pratap Kedia
August 25, 2011 at 3:56 PM