The Maharaja who was a Doctor: the Thakor of Gondal. 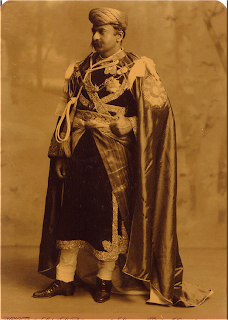 Gondal today is a municipal town in the district of Rajkot in the Indian State of Gujarat. Today it is a relatively small dusty town on the banks of the Godali River, but it was once the capital of the princely state of Gondal. In the mosaic of semi independent states that made up the Kathiawar peninsula, Gondal was one of the first class states. This meant that the ruler was entitled to a 11 gun salute and in those feudal, status conscious times, this meant that the ruler of this state was curt above the rest, though not, of course, of the exalted heights that many others like Hyderabad, or Gwalior could boast.
This state was founded by the Jadeja Rajputs in 1634 by Thakore Shri Kambhoji, who probably came to this region from the Sind province. Subsequently several rulers came to the throne some of whom added to the state’s area by conquest and other means. In 1947, the state consisted of about 175 villages and the Thakor was now called the Maharaja, thanks to an elevation in the state’s status in 1926.
The first class status came courtesy the 11th Thakore, Bhagwatsinghji, who was a remarkable man. Born in 1865, he came to the throne at the tender age of 4. During his minority, the state was administered by the Kathiawar Agency and then a joint administration was set up which carried out the administration until the Thakore took over permanently.

The Thakore was educated as usual in the Rajkumar College; set up to train the scions of landowning families in the English public school style. It was here that he showed himself to be a cut above the common run of chiefs whose interests were limited to say the least. He was the Head of the school and carried of several prizes in English and other subjects. After his school education he visited the European continent as well as England and Scotland and on his return wrote about his experiences in an unprecedented book “ Journal of a Visit to England 1983” This book was published in Bombay and printed at the education Society’s Press in Byculla in 1886. This was probably the first ever book written by a prince whose usual activities during their European visits were altogether of a different kind.
He was much taken up by Scotland and had already decided that he would return there. This he did in 1886 when he sailed for Europe again and this time he enrolled at the Edinburgh University in the medical faculty and duly qualified as a medical graduate, the first and only princeling to do so. He was subsequently awarded an FRCP in 1895.
It was his medical grounding that probably made him set up a modern hospital in the city of Gondal in 1884. In addition he was responsible for many other improvements including the setting up of a railway industry in this town. He is by a wide margin the best ruler ever to have reigned in Gondal.
The reason why I find him interesting is that he is the only doctor ever among the thousands of maharajas, nawabs, thakors and sundry other rulers of the princely states of India. It appears amazing to me that a Ruler of State, who was, in those feudal days looked upon akin to a god, voluntarily subjected himself to one of the most difficult courses of study and qualified for Edinburgh, one of the leading medical centres of the day. He was active in his profession as well as we find from a reference in the New York Times on September 2, 1897. At a meeting of the British Medical Association held in Montreal in Canada, Sir William Osler the most famous American physician of his day and Professor of Medicine at Johns Hopkins, speaking on the development of modern medicine on India quoted from his paper “History of Aryan Medical Science” .I was unable to trace the actual paper, but it was obviously well known enough to have attracted the attention of even American physicians. Incidentally Douglas Argyl Robertson ( he of the AR pupil fame) was a close friend of his and Argyl Robertson died in Gondal in 1909 when on a visit to his state.
The Maharaja as he was now named after 1926, died on the 10 March 1944. Some of his palaces, now used as heritage tourism sites remain. Gondal itself is now a backwater, its glory days died with the Maharaja .
Doctor Gondal Ruler

Anonymous said…
visit http://www.gondalpalaces.com/sightseeing.html
I liked the blog not only because it gave me new information , but also gave me another place to visit when in Gujarat.The palaces are already very famous because most of the Bollywood Block busters requiring a huge palatial building would be at Gondal. It was the place of picturisation of ' Hum Dil De chuke Sanam', an Aishwarya Rai movie
October 19, 2011 at 1:28 PM

Anonymous said…
This is very good information of such a great person in our history not only me but also all Indians where ever in the world feels proud that such a rich person was so educated Inspite he was every thing to live his life lavishly but he gives importance to education and tried very much to educate his state peoples, i salute such a great man of our great histoy of india.
September 9, 2013 at 10:50 PM

Anonymous said…
This man was a legend. I have heard so many anecdotes from my father about the way Bhagabapa conducted his office and personal life. A remarkable man in deed!
January 8, 2014 at 6:50 AM

Padmanabh K. Joshi said…
My grand father late Pranshankar B. Joshi was Hazur Secretary and later Dewan of Gondal State under the rule of Sir Bhagwatsinhji Saheb.
April 18, 2015 at 7:38 PM

We are the leading chess manufacturers & exporter of Wooden Chess Sets in India, Our product are made out of best quality, Contact us now for wholesale Wooden chess board.