The History of the Observance of Ekushe February 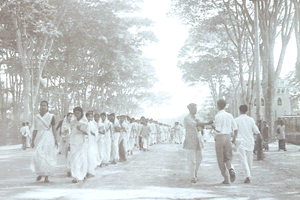 Rally of female students in front of DMC on 4.02.1952 ( This photograph, courtesy Prof Rafiqul Islam is from the Amar Ekushe website.)

I recently wrote a blog post on the Ekushe February Movement. My young friend Subir drew my attention to this article which was originally published in Bengali by the Bangla Academy in Dhaka, Bangladesh. It was translated by Shaft Ahmed for the Amar Ekushe website which brings together documents, writings and memoirs of the historic movement and it ramifications. I am reproducing the article with their permission and I am sure that this important document will be interesting to you all. As it is a fairly long document, I will publish it in two parts.

The History of the Observance of Ekushey
by Hayat Mamud Translated from the Bengali by Shaft Ahmed.