Satyendranath Bose, the Man Behind the Boson 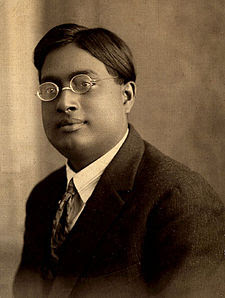 This is part of a fairly long article on Satyendranath Bose, one of the long list of men and women who made Kolkata what it was in the nineteenth and twentieth centuries. I have broken it up into three parts. The other parts will be posted in subsequent weeks.

I had a friend who used to claim that when walking towards his North Calcutta home on his way back from school, he often used to notice a senior citizen with a thatch of white hair sitting on the verandah of one of the houses of the locality. He never realized that this man was none other than Satyendra Nath Bose, whose name has been immortalized in science by the particle boson and who together with Einstein developed the Bose Einstein statistics which revolutionized the study of small particles.

Bose was born in Kolkata on New Year’s Day in 1894. Their ancestral home was in the Nadia district. His father, Surendranath Bose worked for the East Indian Railways before setting up his own chemical and pharmaceutical company. His mother was Amodini Devi who was a typical Bengali housewife. He was the only son and eldest amongst seven siblings and was a brilliant scholar from his school days. He studied in the Hindu School, then and now, one of Kolkata’s leading schools. There is a story that he was awarded 110 marks out of 100 in his mathematics paper by Upendra Bakshi, one of the legendary teachers in the school. When the headmaster demanded an explanation, Bakshi said that Bose had answered all the questions including the alternatives during the allotted time and thus deserved the 10 extra marks. He passed the Entrance Examination from the same school in 1909, delayed by one year because he was unable to sit for the 1908 exams because he developed chicken pox just before the exams.
In those days, one matriculated from school and then came to college to do the intermediate course, a sort of bridge course between the school and the undergraduate courses. This system lasted until the early sixties, before it was replaced by the Higher Secondary system which we faced and now have gone back to a similar system only the names are different.

Be that as it may, he studied in Presidency College, another of India’s and Kolkata’s leading institutions and here he was fortunate in having as his teacher another Bose, Dr J C Bose, one of India’s greatest scientists as well as Dr P C Ray, who was his peer in every respect. Dr Ray, incidentally is known besides his scientific achievements, for being perhaps the first person who urged Bengalis to go into business and industry. Unfortunately he was not heeded in the mad rush for government jobs which has become the hall mark of the Bengali educated class to this day. He was also fortunate in his classmates. One of them was the legendary Meghnad Saha who later became his colleague and a co author of his first published paper. In his intermediate examination he reportedly got 100 out of 100 in Physiology which was his fourth subject.

He graduated in 1913 an earned his MSc in 1915, standing first in the first class on both occasions. His subject was Mixed Mathematics which would correspond to Applied Mathematical in our day. Here too he broke the record of the University when he obtained 92% marks.( Incidentally Meghnad Saha came second in both these examinations). Incidentally he w as married the same year to Ushabala Ghosh with whom he had three daughters and two sons.

Both of them began to teach in the University College of Science initially in the Department of Applied Mathematics, and later in the Department of Physics. Bose took the major teaching load, teaching both physics and mathematics. Times were hard for research. There was no proper laboratory; even books were hard to come across. Fortunately they were helped by Dr Bruhl, a teacher in the Engineering College who taught Engineering Physics and was in charge of the laboratory of the Bengal Engineering College. He had many of the latest books on Physics and lent them to these avid researchers.

It was from here that Bose published his first paper in association with Meghnad Saha. Saha, had incidentally published several papers in the meanwhile. This paper which was published in the Philosophical magazine of London in 1918 ( Vol 36, Issue 212, pgs 199-202) was titled “ On the influence of finite volume of molecules on the equation of state .( See here for a copy).

The next year he published two papers in the Bulletin of the Calcutta Mathematical Society.. These were entitled “On the stress equation of equilibrium" and "On herpolhode". .Bose and Saha meanwhile translated Einstein’s paper on the Theory of General Relativity from German to English after getting Einstein’s permission. This paper together with another translation by Saha was published by the Calcutta University Press as a booklet named “The Theory of Relativity” in 1920. Subsequently he published twice more in the Philosophical magazine , one letter jointly with Saha titled “ On the equation of State”. ( Vol 29, Issue 232, pg 456, 1920) and a second single author paper “On the Deduction of Rydberg's law from the quantum theory of spectral emission” ( Vol 40, Issue 239, pg 619-627, 1920.)
( To be continued)

WordPress is the most popular way for people to build a blog or a website.
Imessolution institute is a leading wordpress Training center in Kolkata and hoogly bandel.In this institute you will get professional joboriented courses.Latest & Revised course as per current industry requirements.we provides training in latest version in wordpress and with learn ftp,cpanel live project.
We also provides course php training,ecommerce website training. we have professional and talented teachers.