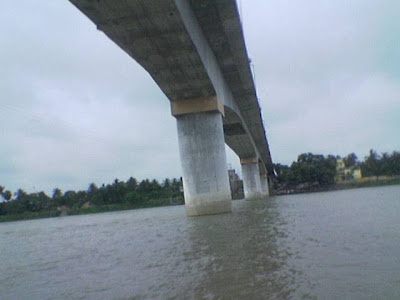 We originate from Baharampur. Whenever we were asked in our younger days (nobody really asks such questions nowadays) “ tomader bari kothay ? “ (which meant “Where does your family originate?” And not as one would think from the literal translations, “Where do you live?” we always answered “Baharampur.”
My father was born in Nagpur during my grandfather’s stint there as an official In the Indian Audit and Accounts service, but he was brought up in Baharampur where the family house was. We have grown up with stories of Square field, the Nawab’s palace, the riverside and many others and my father always used to claim that the building of the Krishnanath College where he studies was modeled on one of the dreaming spires of Oxford, I forget which one.
Some of my cousins also grew up there; two of my paternal aunt’s sons had their education there as well.
We used to visit Baharampur very occasionally. Because of not so often talked about family feuds following the death of my grandfather and the distribution of his property, our visits were never frequent or long. . In fact it was only when my Jethu, who was the nominal head of the family as the eldest surviving brother, retired there after his Army career and built a house there that I have visited Baharampur a few times.
However my father and his brothers were inordinately proud of Baharampur. This pride was shared by those cousins of mine I was talking about. When we were growing up, Baharampur had become a backwater and we did not frankly think much of it. We were proud inhabitants of India’s greatest city, Calcutta. Since then, there have been changes in the stature of Calcutta, but not much has changed for Baharampur, which still remains a moffusil town, better known for its political violence than anything much else and the fact that it resisted the all conquering Left during its heady decades of power.
But as I said, my dad’s family was inordinately proud of the place. And one of the important reasons for their pride was the chhanabora. There was real threat of physical violence if you mentioned, in their presence, that it was not the greatest sweetmeat known to man. Whenever there was a family wedding, large tins of Chhanabora were transported to Calcutta and I am eyewitness to the fact that when I got married, my dad, two of his brothers and one of the aforementioned cousins polished off an entire tin in a matter of a few hours. When I say “tin": please do not mistake them for the decorous tins in which we buy biscuits and so on, these were about 2 feet high, the sort you see in old fashioned grocers shops, and packed with large numbers of the sweet. I hated it. It was over sweet and I did not enjoy the taste of the fried covering of the chhana underneath. 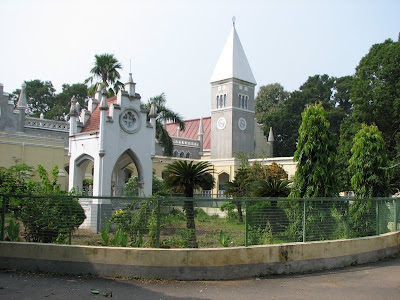 It was also de rigueur to send a large Chhanabora, 10 /12 kgs in size as part of the presents that went to the bride’s house ( Totto as we call it in Bengali). My father used to bemoan the fact that there was nobody In Baharampur now who could make a one maund size chahanabora anymore. That was the size that was sent from their house for my Aunt’s wedding, in the forties.
But the time of which I was talking was a matter of about 30 years ago. Large chhanaboras had receded from my memory until I read in the papers of the competition between the Congress walas and the Trinamoolis to offer their leaders the largest chhanaboras in existence. I was happy to find that they were still unable to offer a one maund chhanabora!
You can read of these battles and how the chhanabora is prepared here. I wish that my father who is now seriously ill and unable to communicate much with the external environment could read of these battles. He would have been very happy to see the Chhanabora getting its place in the sun. 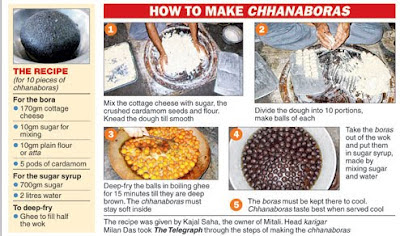 Shailesh Misra Thanks!!!
6 September at 12:15 · Like
Debasis Biswas Wow! I went to Baharampur only once. At six months of age; for my annaprashon. My maternal uncle, being the ITO of that belt ( ITO's in 50's were as good as Commissioners of today), could not manage his schedule to come down to Kolkata. (Not sure whether chhanabora was in my menu! Ha..ha..) Nice nostalgic reading; keep up.
6 September at 16:44 · Edited · Like
Uttiya Chowdhury I have become a frequent visitor of Berhampur as Anjali will shortly be a part of your origin.
6 September at 18:52 · Like · 1
Abhijit Banerjee Ah...I have great ties with Baharampur because my mother's mamabari is there. Her Dadu was the great K.P. Chattoraj of Algebra fame and their house is on a road named after the great mathematician! I have visited so many times...chhanabora is one of my first gastronomic loves from the age of I think 2 when I first went. Even now whenever I am driving back from any trio to North Bengal, I stop on the highway and buy my fix.
8 September at 10:54 via mobile · Like
Kishalay Datta : great boss ? have to taste it ? Similar stories do exist regarding other sweetmeats which we also heard from our fathers, uncles and grandfather
October 17, 2012 at 5:36 PM