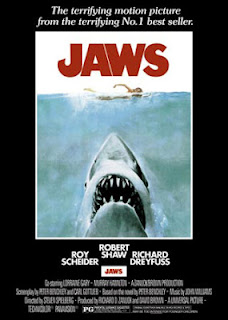 The world of sharks really came to our attention when we saw the movie Jaws. This movie, based on a Peter Benchley novel, sparked a fear of sharks that was real, even for us who lived a safe 100 km from the sea and never swam in anything more dangerous than the Marine Club swimming pool.
Sharks have sparked fears, but mainly in Western societies for the past hundred years at least. However the Polynesian and Indian Ocean communities who have lived with sharks for thousands of years had no problems with them during all this while, looking upon them as their ancestors or as protectors of fishermen.
Once the Westerners began to encroach on tropical waters as a prelude to their predatory raids on Eastern lands, they began to become familiar with sharks. One of the oldest stories of shark attacks on a Western sailor was recorded in 1580 when a seaman on a ship travelling from Portugal to Goa fell abroad. As recorded ‘There appeared from below the surface of the sea a large monster … it rushed on the man and tore him to pieces before our very eyes. That surely was a grievous death.’
The first real hysteria related to shark attacks was in 1916 when in the American state of New Jersey sharks killed four people in five separate attacks at two beach resorts and at place more than a dozen miles inland. This, more than anything else, gave rise to the enduring myth of shark as predator. Another incident that reinforced this image took place in 1945 when the USS Indianapolis, which had delivered the uranium of the Hiroshima Bomb was sunk by a Japanese submarine. It was later claimed that a major number of the survivors of the initial explosion, were killed by shark attacks. If the boot was on the other foot, no doubt, the American Right would have called it a divine retribution for the atom bomb. 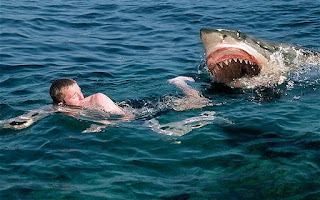 Be that as it may, actual facts are that shark attacks are exceedingly rare, fatal attacks much rarer still. Most attacks are mistaken attacks by sharks which confuse a swimming leg with a fish and many such attacks end with the shark spitting out the human bite! But that is not to discount the fact that some sharks are dangerous and can easily end the life of a swimmer or surfer. The international Shark Attack File , which documents shark attacks suggests that in the unlikely event of you being caught up in a life and death struggle with a shark , you should fight back.
“We advise a proactive response. Hitting a shark on the nose, ideally with an inanimate object, usually results in the shark temporarily curtailing its attack. One should try to get out of the water at this time. If this is not possible, repeat bangs to the snout may offer temporary restraint, but the result will likely become increasingly less effective. If a shark actually bites, we suggest clawing at its eyes and gills, two sensitive areas. One should not act passively if under attack – sharks respect size and power.” So, now you know what to do!
There are three principal types of shark attacks. These include hit and run attacks which occur in shallow waters and are the result of the shark confusing the human for its usual prey. Sneak attacks , more often in deeper waters, which usually result in fatalities and Bump and bite attacks which occur in open sea and are aggressive attacks which are difficult to repulse.
However sharks have not obtained their predatory image entirely without cause. Some sharks are dangerous, such as the case of the sand tiger shark, which goes in for oophagy or uterine cannibalism. The fetuses eat each other up in the womb itself, only two babies emerging at the end of the pregnancy, one from each of the uteri of the mother. This newborn babe is a metre long and already an experienced killer according to shark experts. 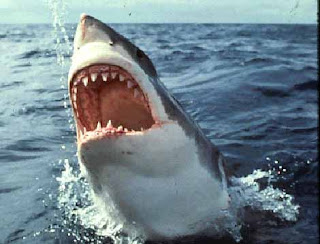 The sexual habits of sharks are also not above reproach. Whenever scientists have managed to observe sharks mating, they have noticed that the procedure has not really been very romantic. The males bite and trap the females and force them to have sex. Roaming bands of males take turns to insert their claspers (male organs) into them in turns. A sort of gang rape. No gentleman this shark! Thus a litter of 60 pups may have as many as 7 fathers.
“I know of two things about a horse,
And one of them is rather coarse” as the old rhyme goes.
Perhaps this could be said more truly about sharks.