Madhumita Sen has been a friend of ours for many years now.At present she lives and works in Malacca.
She has written a detailed acount of a recent trip to Beijing which I think is very interesting.I requested her to let me reproduce it in my blog. She has graciously agreed. So here it is.
You might want to also read my impressions of China here. 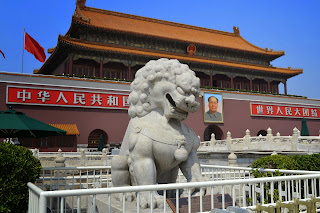 We arrive in Beijing early morning on 5.8.2013, 2am. Beijing airport is huge and quite well managed. Much like so many other international airports, we note, blearily. That’s nice though - pictures of the great wall as we clear immigration. Took some snaps immediately!
No one there to meet us at arrivals, had to hang around till 2.35, then this young Chinese girl rushes up. It’s Alice, our tour guide. A short, spritely young lady, in shirt and trousers, smilingly anxious face, no make-up, blond bleached hair. She is very pleasant, English is a bit of a struggle, but we get by fine. She leads us to a van and we pile our luggage in. The driver of our van is called Joe, a strapping young guy who knows no English, but is friendly and helpful. The strong silent type, mostly.
Alice chats with us all the way to the hotel. She is from Hainan province but has been living and working in Beijing for the past 16 years. She likes being a tour guide, but tourism hasn’t been very good lately, since the rich western tourist trade has been down for the past few years. So she is looking for a second job, taking Chinese tourists abroad. She has recently passed the required exam and is waiting for a job offer. Meanwhile, us poor Indian/Malaysian tourists will have to do!

We check in at 3.30am and are dizzy with tiredness. Still, the room is nice, three beds and a good bathroom with a lovely hot shower! We all have our bath and drop dead asleep at 4am.

DAY 1: Morning arrives early, and my husband is up, demanding tea! He makes it, with some help from me. We drag ourselves to breakfast at 8am. Chinese breakfast is rice porridge, noodles, fresh salads, steamed veggies and slices of ham and sausages. There is bread and jam, but we don’t touch them. No knives or forks, only soup spoons and chopsticks. My son and I manage with chopsticks, hubby copes with two soup-spoons!!! At least the coffee is hot!
Joe arrives at 11am, but Alice is late, finally arriving at 11.40, full of apologies. We set off in our allotted van, first for lunch. We arrive at a quaint ‘garden restaurant.’ The place is decorated partly like an old time royal rest room and partly like an opium den! We eat in a private room with a huge round table covered with yellow damask, and red chairs (all dining tables in China are round – harmony). Yellow signifies royalty (us?!) and red means good luck. Nice start to our holiday! We have a sumptuous lunch of chicken roast (served along with the head!), grilled prawns, pork, beef as well as steamed veggies, accompanied by jasmine tea and coke as well. Are unable to finish, but Alice says we must not clear the table, since leaving (wasting?) food implies we will be wealthy!!! 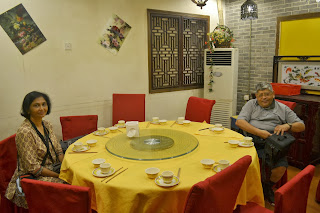 After lunch, we manage to roll ourselves out, and then starts the sight-seeing. We first go to the Beijing opera house which is called ‘the egg’ by the locals, unsurprisingly – it is shaped like one!
Next stop: Tienanmen Square. It is HUGE! Mind boggling. We cross the Great Hall of the people, then enter the square. I am reminded of all the events of June 1989 that took place here, but no sign remains, it is a celebratory square.
The place is quite crowded. The Monument stands in the middle, there are two HUGE LED screens, screening tourist spots of China, and on one side is the Hall of the People, while on the other, the National Museum, and on the third side, the Tomb of Chairman Mao (which lies along the correct north south direction of the holy ‘Imperial Way’ – so much for man of the people!). The place is spotlessly clean, in-spite of the crowds ... awe-inspiring. It is a really hot day, and we are tired, but we walk on. This square, we are told, can comfortably hold 1 million people. The Mayday and October 1st celebrations are held here every year.
On one side of the square, we enter the pedestrian underpass and come out across the other side at the entrance to the Forbidden city. This is also built like 3 concentric (is that the right word?) squares, with 3 layers of gates at either end. The Forbidden city gates and the Tienanmen square were built initially in 1420 by the Ming Kings. They have been refurbished and rebuilt many times since. The ‘Cultural Revolution’ saw the most damage, when all things royal were ransacked or destroyed.

Over the last 2 decades, a lot of the heritage sites have been rebuilt/repaired. The gates and bridges over the moat, all run in the north – south direction, called the ‘Imperial Way.’ (info thanks to Alice!)
Each gate is guarded by 2 lions (of interest, there are no lions in China, only tigers. But all major buildings are guarded by the ‘king of beasts’ the lion!). The female lion is on the right, and she has a baby lion in her left paw. The male lion sits on the left (as you face away from the building), and he holds the whole world in his left paw.
We enter the first gate, walk about 500m, then enter the 2nd gate, walk another 500m, and finally, the 3rd gate. Then we enter the royal palace area of the ‘city.’ Too many buildings and too many rooms! Best consult the guide books for details! Most of the side rooms are now the National Museum, and hold all the remaining artifacts of the Mings which haven’t been destroyed or stolen during the ‘peasant revolution.’
We enter another gate to come to the ‘women’s and eunuch’s area, and then exit via the royal gardens. The gardens are beautiful and tranquil (but for the crowds!). The vegetation in Beijing is very different from both India and Malaysia. Most of the trees here are firs (Christmas trees!) and pines, but really old and huge with interestingly knotted trunks. There are some bamboo groves, and many large stones brought over from the river. The stones have been weathered by water into fascinating shapes, and they are used to decorate the parks. In the middle is the prayer temple – typical pagoda style.

We exit the garden from the back gates of the palace (whew, that was a lo-o-ong walk!), and say goodbye to the last guardian lions, then cross the moat. It is a beautiful moat, and we learn another interesting fact. One of the Ming kings wanted a mountain to guard his palace, and after the moat was dug around the palace, the mud was used to create a hill, which now has a beautiful pagoda built on top (thank God, we didn’t have to climb that!). One side of the moat is lined thickly by weeping willows, reflected in the beautiful still waters.

It has been a really long day (after a sleepless night), so we decide to return to the hotel to rest. It is now 5.30pm.
We all crash for a couple of hours!