By the Banks of the Mekong Part 3 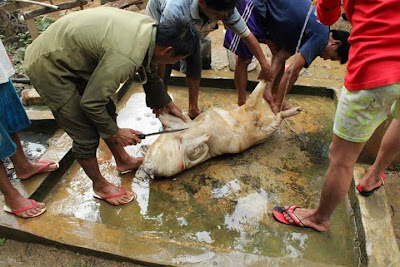 Concluding part of the article by SHREYA DUTTA

The next week was extensively involved in wiring and solar panel installation (capacity: 3 KW). By the second day the guys’ and girls’ dorms (classrooms basically) had fans and lights working. There was no teaching but on interaction with the local children it was evident that they have been more exposed to English medium of education since lots of foreign trusts have visited and donated to the school in the past. On the third day, the villagers started preparing for the elaborate farewell ceremony which was to take place at night. Extra lights were connected in the playground, furniture set and the children rehearsed song and dance. The thread tying and blessing ceremony for this village was grander than the previous and this time even the children participated. The villagers performed for us and we performed for them. They thanked the team by offering us body parts of a barbequed pig which they had slaughtered in front of some of us in the afternoon. Thrilling as it may sound, I’m sure I wouldn’t want to relive this part of the trip. On the fourth day, we set up various booths outside the classroom to introduce to the children some of Singapore’s culture: giving them samples of Singaporean snacks called Kacang Puteh and modeling in Singapore Airlines costume. There were other booths for making the children aware of basic hygiene, environmental issues and common diseases in Laos and for carrying out basic science experiments. In the afternoon, the ‘bigshots’ bid adieu to us and left for Singapore while some of us completed the remaining wiring work, after which we visited the mini waterfall in the village where 8 small turbines have been set up to generate electricity for some households.
The following day we said goodbye to the villages, gifted them wiring items and clothes and set out on our way back to Luang Prabang. Couldn’t but feel a little grief while getting on to the boat and leaving. On reaching Luang Prabang, we had some time to kill. So we ventured on some Laotian Iced Coffee (delicious!), checked out the Luang Prabang museum and then made our way to the airport. Our next stop was Vientiane. On reaching the hotel, we let all the luxuries available in it spoil us. After what seemed like a never-ending facilitation and experience-sharing session we called it a day at 2 in the morning. The following day was going to be a long one. After breakfast, we headed out to National University of Laos (NUOL) to interact with the students and check out their campus. Even though it’s the largest university in the country, the infrastructure and living conditions in the hostel are shoddy with much room for improvement. This reflects on their need for developed nations to assist them in uplifting their educational institutions. Despite this, the students don’t fail to dream: one of them even enquiring about the Masters’ degree offered by NTU. After gallivanting around the campus we headed out to Buddha Park, which is a 2-hour bumpy ride from Vientiane but worth it. It is a park full of sculptures of Buddhist and Hindu deities, with the most famous one being that of the Dead Buddha or Palinipan. In the evening, to celebrate a successful trip and as a reward for our hard work, we ended the day at a restaurant-cum-bar with good music and food and a visit to the night market. 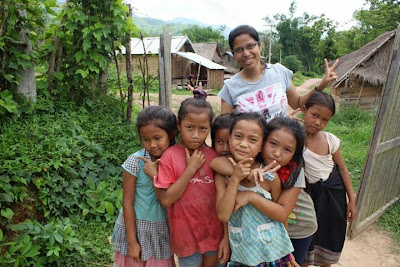 On the last day we boarded onto our flight back to Singapore, with a million memories and lessons learnt. It was my first voluntary experience and extremely humbling and enriching. Given a chance, I would head out for such ventures again and again in order to serve mankind by providing them with electric power and touching the hearts of children, making them remember my name.