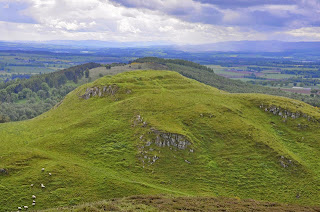 In our school days, English Literature was taken very seriously, especially for those who appeared for the Senior Cambridge examinations. And inseparable from Eng Lit was, of course, Shakespeare. If I remember right, we studied Julius Caesar in Class VIII, Midsummer Night’s Dream in Class IX and finally Macbeth for the finals. Shakespeare fascinated me. I knew and still know large chunks of some of these plays by heart (as we used to say in those days). I am still liable to spout Macbeth’s speeches (“Is this a Dagger”) or Antony’s speeches at the drop of a hat as my long suffering wife and daughter will vouch. One of my classmates; today he and his wife run West Bengal’s No 1 jewelry chain; was a superb actor and he brought to life the three witches as they plotted in the heath as he did Shylock as he complained “ when you prick us do we not bleed? “
However we hardly ever saw the plays acted professionally. I remember that the British Council had organized a performance of Macbeth (at Rabindra Sadan, if I remember right). The three witches were just as I had imagined them and the performance left me enthralled, even if Banquo’s ghost disappointed. One prominent item in my list of 50 things to do before I die is to watch a performance of one of Shakespeare’s plays in the open air in England. Somehow the thought of sitting on a village green while Shakespeare is performed is one of my recurrent ideas of what an English summer is all about. The only time I have been in the UK, I was so hurried that I could not even think of doing this, so it awaits another visit sometime; perhaps.
The story of Macbeth starts with the three witches who tell Macbeth that he is to be king, but also tell his companion Banquo, that he would father a line of kings. It is the story of a not so strong minded but ambitious man who is led by an even more ambitious wife to commit regicide. Not just any old regicide but the murder of his sovereign while he lies asleep in his own house as a guest. He then kills Banquo and then tries to also eliminate the old king’s sons but they get away to safe sanctuary in England. He becomes king but unleashes a reign of terror during which he mercilessly kills the family of Macduff the thane of Fife who, the witches warn, will be danger to him. The witches assure him, however, that he would only lose a battle if the woods of Birnam come to his castle at Dunsinane and that he could not be killed by anybody who is of a mother born. These assurances are proved to be false assurances as his opponents cut branches of trees from the wood to hide their advance to Dunsinane and his most implacable opponent Macduff turns out to be born of caeserian section . He dies in a hand to hand combat with Macduff and Scotland is rid of a tyrant. 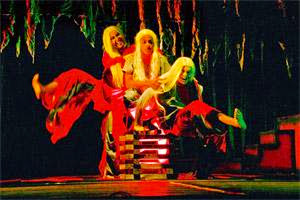 Kaushik Sen’s version of Macbeth in the Bengali stage
The story is gripping, taut and exciting and unfortunately almost totally untrue. Shakespeare depended on Holinshed’s version which was far from correct and while he probably knew this he purposely kept this story as it was flattering to the then king James I of England who united the thrones of Scotland and England after the death of Queen Elizabeth. The king was apparently descended from Banquo who, it is said, fathered the Stewarts of Scotland and England.
The real story was that Macbeth, far from being a bloodthirsty courtier who killed Duncan as he slept actually defeated him fair and square in war between rulers of Northern Scotland and the South, during which he ( Banquo) was killed . Macbeth was also one of the great kings of Scotland and ruled for over 17 years and ruled it well though in his later years he became a little erratic and finally died in battle against the forces of Malcolm, Duncon’s son, assisted by the English. .
Shakespeare however knew a good story when he saw it. If, in addition, this meant that he could flatter his chief patron, the King of England, then all to the good. And in his hands Macbeth changes from a brave warrior to a blood thirsty tyrant and finally a mad king who dies as he deserves. In my opinion, the play is one of his best though Shakespearean scholars may cavil.
Dunsinane hill still exists. Macnusson in his “Scotland” assures us that while it is still full of undergrowth, it will soon be cleared so that we too can see the valley from where the Birnam wood came to Dunsinane . It probably has been cleared as this picture downloaded from www.geograph.org.uk shows Maybe I will make it no 123 in my list of “to sees”. Maybe!