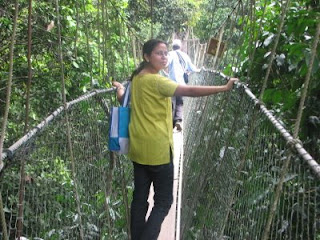 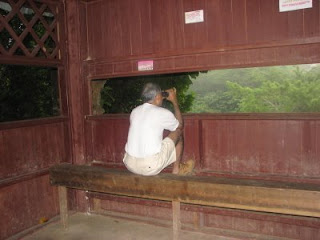 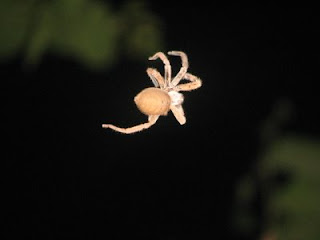 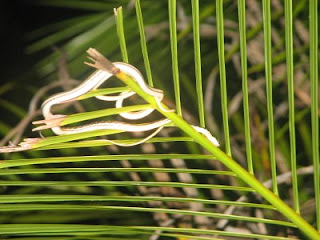 1 My Daughter Ninni on the canopy
2 Birdwatching from a hide
3 One of the thousands of spiders in Teman Nagara.
4 Common grass snake in the plants in the compound


Occupying a huge swath of territory in the centre of Malaysia is one of the world’s largest areas of protected rain forest. This is the Taman Negara (Malaysian for “ National Park”). It occupies 4343 sq km of land spread over three states, Kelantan, Pahang and Terengannu. It is claimed that the landscape here has remained unchanged for the past 130 million years, even the recurrent Ice Ages made no impression on it. Originally named after King George V, it received its new name after independence.
We approached Taman Negara from Kuala Lumpur driving east past the Genting Highlands. Later we left the tolled Highway system to enter the “Normal Highway”, not fenced off, with crossings regulated by traffic lights and still at least four lanes. No highway in this country has even a passing resemblance to ours in West Bengal.
We stopped for lunch in Jerantut, where we had the most marvelous lunch at a Chinese restaurant. Even here in the heart of Malaysia, all the workers were from Indonesia. I talked briefly to one of them using our driver, Mahendran as an interpreter. She had arrived just the day before, referred by an agent from her home village who had sent workers here earlier. She expected to earn at least three times what she earned at home and be able to send money home. Her situation is the same as ours, at just another level!
From Jerantut, the road became a little more quiet, traffic thinned down. Small patches of jungle appeared, giving us a brief idea of what lay in wait. Once Mahendran had to break sharply to avoid running over a water monitor which was about to cross the road. This is a familiar figure from the Bengal countryside, though not so common nowadays. We soon turned into a smaller two lane road. Now the jungle began to close in, interspersed by plantations. After about 4 hours driving we were at the Kuala Tahan. This is one of the principal entry points to the National Park and here the road ends. You have to cross the Tahan River to enter the forest proper.
Standing on its banks we began to get an idea of what Malaysia must have been like before the advent of the Europeans. The local population now called the Orang Asli were the sole inhabitants of these jungles, sharing their space with tigers, the Sumatran rhino, Malayan Gaur and the Elephant. Even today small number of these large predators adnd their prey persist together with uncountable numbers and species of birds, smaller animals and a profusion of reptiles and insects in numbers that boggle the imagination.
We crossed the river to our resort. The Mutiara resort is on the other side of the river adjacent to the forest. There are lovely chalets, with all the mod cons and if you leave the compound you are immediately engulfed by the forest which lies adjacent ready to devour these puny creations at the earliest opportunity. We were here; at other entry points it is possible to go for long treks as well as to climb the highest peak in Peninsular Malaysia, Gunung Tahan.
The resort organizes all sorts of activities; these included a jungle night walk. It is extremely thrilling to walk along the jungle trails, seeing myriad forms of wildlife, mainly insects and snakes, sambar deer and something I did not know existed, a mushroom that glows in the dark! We ended with a marvelous dinner at their restaurant. Overlooking the Tahan River, this restaurant serves cuisine from all over the world. It is also possible to get a much cheaper meal at restaurants on barges moored on the river, but tonight luxury seemed to be the way to go!
Next day we went for a canopy walk. The world’s longest canopy walk has been constructed a stiff 3 km walk from the resort, its height soaring to 150 feet over the ground. It was a revealing experience as we walked from stage to stage, once coming face to face with a flock of parakeets and then seeing the Tahan river flow muddily into the distance. The trees were unbelievable, their size and girth larger than anything I have ever seen before.
The resort itself is also extremely relaxing. You can simply sit on the verandah watching the world go by, as birds flit through the trees that dot the campus. That is what Susmita did, refusing to tramp through the sweaty rain forest. We saw among others, a pair of racket tailed drongos, one of my favourite birds.
We had only the weekend there, but it is ideally suited for a long stay, when you can sit and watch the birds, walk the trails and raft lazily down the river. Staying here gave us an insight to why it is that rainforests are best approached from the river. Trying to force a way through the undergrowth is madness .It is also dangerous, It is much more comfortable to approach deep into it by Nature’s highways and that is what many tourists do. We have done the same in many occasions in the Sunderbans.
We drove back even faster, in about three hours. As we entered the lights and traffic of Kuala Lumpur, it seemed a dream that just three hours away, the primeval forest lay, ready to awe us as it has our ancestors throughout human history.
forests travel