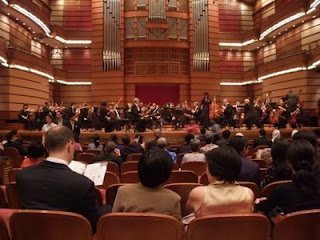 The Malaysian philharmonic Orchestra is housed at the Petronas Philharmonic hall at the Twin Towers of Kuala Lumpur. I visited it for the first time this week. It was a weekday concert, short, about an hour, and they played Terry Riley, an American modern composer. He has been heavily influenced by Indian classical traditions and this was evident in the composition. The MPO was accompanied by a large contingent from the Malaysian Youth Philharmonic Orchestra as well.
I am really not very competent to comment on the quality of the music played. However, even to my inexperienced ears, the standard did not seem to be very high. However they played with competence and I enjoyed the evening, this was my first exposure to live Western music played by a full scale Orchestra.
But as always in Malaysia, the infrastructure was superb. This hall sponsored by the inexhaustible oil revenues of Petronas, is built on a grand scale, the high ceiling, the backdrop and the seats were all, at least to my untutored eyes, superb. We were sitting in a box, not because we were feeling rich, but because all the seats were sold at the same cost, at least for this concert.
I could not help but contrast it with the way we listen to music back in India. Could we not build such edifices for the music of our greats? Or perhaps we can’t because the acoustics of this hall would not suit Indian classical music. Who knows, I certainly don’t. The main point was that I had a jolly good time and plan to go back for more as soon as I can.
MPO Western classical music

Anonymous said…
This comment has been removed by a blog administrator.
November 22, 2009 at 6:40 PM