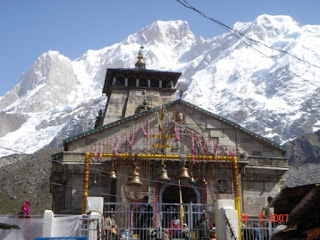 I was watching a National Geographic programme on the Haj pilgrimage on TV yesterday. It was moving to see how a couple of million pilgrims from around 120 countries come together for a pilgrimage that has been happening for the past 1400 years. In fact the pilgrimage to Mecca had been going on for many years before Prophet Mohammad made it one of the cornerstones of Islam. Similar pilgrimages exist in all lands and in all religions.
But there is no country that epitomizes pilgrimages as well as India. India is the land of pilgrimages. People have been going on pilgrimages to holy temples, rivers and mountains for well over 2500 years. There are pilgrimages all over the land. Some of them were arduous in the past, but now modern facilities, and roads have made them easy of access. One such must be the temple of Jagannath in Puri which has attracted pilgrims from all over the Indian Subcontinent for aeons. As recently as the nineteenth century, the pilgrimage to Puri from the heartland of Bengal involved a difficult and dangerous journey by boat or by roads infested with bandits and wild beasts. Today it is easy to access, but not less revered for all that.
Another pilgrimage that has lost its danger is that to the Sagar Mela. Hindu mythology has it that this was where the ashes of the sons of King Bharat were washed over by the Ganga as it emerged from the locks of Shiva and came over the Indo Gangetic plain to reach the Bay of Bengal. Sagar Island lies where the Hooghly debouches into the Bay. It is a windswept island, lightly populated, but during the month of January it comes alive as more than 300,000 pilgrims gather here from mainly Uttar Pradesh and Bihar to pay homage to the memory of an event that occurred thousands of years ago and to bathe in the freezing waters of the Hooghly to wash away their sins.
Most of the pilgrimages that I have made though not really with religious purposes have mostly been to the mountains. I still remember the old up country lady whom I met walking up to Kedarnath. Inadequately clothed, she was barefoot, carrying her belongings n a small sack.. As we walked past in our climbing boots and rucksacks, I never thought that she would reach her destination. But as I sat sipping tea in Kedarnath I saw her again walking slowly but steadily to the temple. Her faith, evidently, made it possible for her to climb mountains if not to move them!
Such sights are common in the Himalayas. These mountains are studded with Hindu and Buddhist pilgrimages and millions of pilgrims come every year, sometimes at great personal risk and danger to keep a date with the Gods. In the rarefied air of the mountains, the Gods do seem nearer somehow. Even incorrigible atheists like me have a feeling of spirituality. It seems possible in those climes that the gods may exist and influence the doings of men. However there is good scientific reason to believe that this might be related to the thinner air of the higher altitudes.
But faith moves mountains. The pilgrimages that take place in every district of India at all times of the year prove that when you believe, no difficulty is too great, nor any distance too long. While I do not share this faith, I can at least acknowledge its power and the ability it has to influence ordinary men to do extraordinary things.
(The picture is that of the Kedarnath temple)
Kedarnath. Pilgrimage