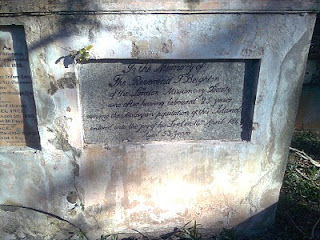 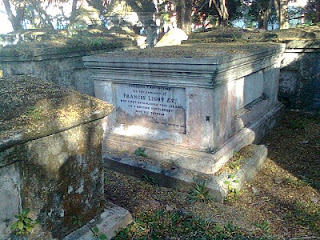 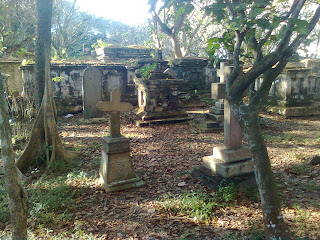 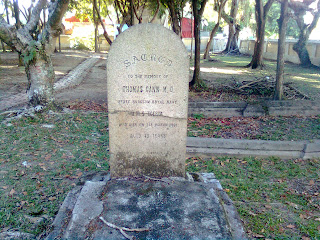 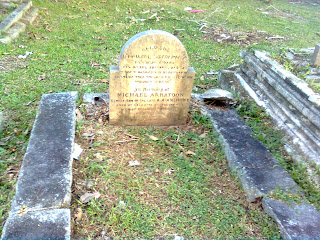 I was in Penang for a business meeting last week relating to a study we are doing there in collaboration with one of the hospitals. Meetings over, I had some time to spare, which I decided to spend in taking a walk around the area where my hotel was. The biggest problem in Malaysia is the humidity which makes walking a bit of a tedious activity, but today there was a balmy breeze from the Malacca Straits which made life a lot more enjoyable.
As I strolled down Northam Road, now named Jalan Sultan Ahmad Shah (re namers also exist in Malaysia, though not so virulent in their work as in Calcutta), I suddenly came across the Protestant Cemetery. It is a leafy walled enclosure full of tombs of Britishers, some Chinese, and Armenians who ended their life on this island. The first burial took place in 1789 just three years after the settlement was founded by Sir Francis Light in 1786.
Francis Light was an interesting person. Probably the illegitimate son of a minor nobleman, Francis found himself in Madras ( now Chennai) where he was the skipper of a ship, Speedwell. He traded between India, Sumatra and the Malay Peninsula and soon established contacts with the rulers of Kedah who offered Penang to the British in 1771, hoping to find protection against the imperial designs of Siam which was expanding south wards. This offer was not immediately taken up and Francis set up base in Phuket, then called Junk Ceylon but maintained his connections with the Sultan of Kedah and finally prevailed on the then Governor General of India at Calcutta to accept the Sultan’s offer and took control of Penang in August 1786. Incidentally his son, William founded the Australian city of Adelaide, almost exactly 50 years later. It is another matter that the British did nothing to prevent Kedah from being taken over by Siam later.
Francis Light is buried here as are many other luminaries of that time. These include several Governors of Penang as well as the founder of the Penang Free School , Reverend Hutchings,. Penang Free School was the first English school in Malaysia and is the alma mater of many famous Malaysians and Singaporeans. When I visited the cemetery there were some bouquets offered by students of the school on his tomb. I later discovered that it is a tradition for the senior class of the school to come and pay homage to him every year on the anniversary of the founding of the school.
Another interesting tomb is that of a very young ( 31) officer Thomas Leonowens. He died in 1839, leaving behind a young widow and her son. This widow was Anna who was employed by the King Of Siam as a teacher and she left behind a volume of memoirs entitled “The English Governess at the Siamese Court”which was the basis for the famous 1956 musical “The king and I” starring Deborah Kerr and Yul Brynner. Recent research has shown that she had exaggerated her influence in the court and made up much of the material that so captivated her 19th century audience. However it remains a good read.
There are other tombs which include some of Chinese Christians who had fled the mainland during the Taiping rebellion and sought shelter in Pulau Penang. They are some 60 such graves which have Chinese inscriptions and tell the story of these unfortunates who died far from their homeland.
A small door in the inner wall leads to the Roman Catholic cemetery which is not very well maintained. The grounds are extremely overgrown and most of the graves are overrun with creepers and other vegetation.
One of the marble plaques that I saw was imported from Calcutta . It was sent by a Brown and Company , and followed by the words SCTS,I was unable to understand what this meant and my cursory search in the internet also failed to throw up any clues, except that this company had provided plaques to many cemeteries all over India in the 19th century and these words recurred in all their work.
The graveyard is shady, though the trees had mostly lost their leaves giving them a somber look that fitted in well with the place. I saw a newly married couple who had come here in their wedding finery to have a photoshoot here. I was wondering if it was an appropriate place, but they seemed to have no problems, the lady spreading her long trail to ensure a striking picture as she cuddled up to her husband.
This cemetery closed down in 1892, when it was probably house full here, and the dead had to find another place for their rest.
There has been some restoration here and there are signposts and board describing the place. It is an instructive place to spend an hour before reentering the bustle of Penang.
Cemetery Pulau Penang tourism

F said…
I was just at this cemetery a few weeks ago and will be posting my photos on my blog soon. I found it to be a very serene and beautiful place.