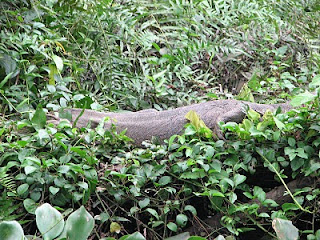 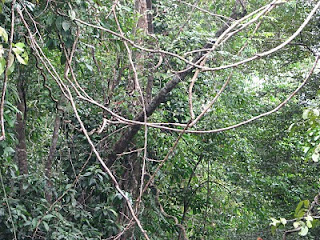 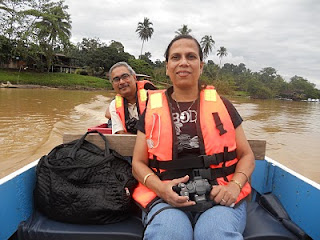 Floating down a river is the best way to see some types of country. It is perhaps the only way to enter some types of forest. For instance, there is no way to see the Sunderbans except by boating down the creeks and rivers that maze through it. It is a similar state of affairs in the Borneo rain forest. It is practically impossible to walk in the rain forest. There are many descriptions of intrepid explorers who did, and it involves hacking a way through dense undergrowth and grappling with insects, reptiles and all manner of animals big and small.
The safer way to do it for lesser mortals is to float down a river with the rainforest on both sides. The Kinabatangan River is wide, muddy coloured , and appeared o have fast current. However the boatman took us in to the Menanggul River, a tributary which had dark black water, a completely different type. The reason escaped me; unfortunately our boatman could speak only very basic English, so that it was difficult to conduct a complete conversation with him.
This river was narrow, about 100 feet wide in most parts, the forest closed down on us immediately. At places we saw that trees had fallen into the water and partially narrowed the channel. The feeling of floating down this primeval forest is indescribable. There is still silence, broken suddenly by a rustle that startles you until you see a red leaf monkey peering down at you.
The principal attraction is, of course the Orang Utan. The nonsense rhymes of Sukumar Ray suddenly run irreverently in my mind :” Holde Sabuj Orang Utan” and as soon as I recite them to myself, there they are; a family foraging in the heights of a tree, deliberately crossing from one branch to another. We have already seen them in Sepilok, but seeing them in the absolute wild is a thrill of another order.
The Proboscis monkeys are commoner; they are the champions of primate acrobatics. They appear to be showing off as they jump from a branch, apparently heading for disaster, when at just the nick of time, they grab another and leap off in another direction. But the crowning event was when just ahead of us a family of proboscis monkeys leaped off the braches of a tree on the left bank and swam to the other bank and just as quickly leaped up to the safe branches of another tree. The most amusing was one little chap who jumped, but grabbed a branch just in time to prevent a plunge into the river and sat chattering to itself when all his companions had crossed over. Other monkeys admonished him from the other side until he finally made the plunge, emerging triumphantly on the other side. I felt like applauding.
A little later we found that the poor monkey had every reason to be circumspect. A crocodile nosed its way down the river, looking for all the world like a log of wood. I was reminded of one memorable bath in the Mahanada River at theSsatkosia Gorge Sanctuary with gharials visible within easy reach. Gharials don’t attack men, though sometimes, they forget that. But crocs are dangerous and can cause much disaster in riverine communities.
The forests are alive with birds; we saw the pied and the rhinoceros hornbill, as well as myriad forest species which I could not really identify. It is difficult to identify species unless you can take a good picture and scrutinize it later. However there were Kingfishers galore including several not found in India and a lovely and huge darter bird which flew ahead of us, as if leading the party.
The river cruise lasted four hours, but it was much too little. We were staying at Sandakan, so there was a long ride back. Back to the Kinabatangan and finally back to our hotel late at night.