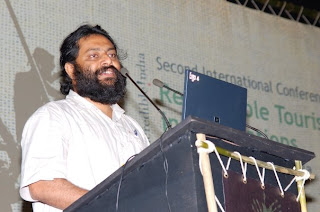 I am proud to call Raj Basu a friend. There are several people in Siliguri who are remarkable, both in their outlook as well as in the sort of work that they have done. Raj is one of them. He is one of the founders of Help Tourism, a Siliguri creation that has now spread wings and was the driving force behind the creation of village tourism and home stay tourism in India. He has been the architect of several innovative tourism products like the Mango festival. He is well known in tourism circles but in my opinion, he should be much better known still. I have written earlier about one of his creations. It is the turn now to tell you about Raj Basu himself.
To do so, I have used an interview format, again for the first time in Reflections. Raj talks about himself, his work and his plans for the future. I only hope that he will be able to complete the revolution that he has started in the tourism scene in North Bengal and NE India.

Anonymous said…
A very good read. Thank you for giving us valuable information on help tourism and tourism gandhi.
Yachana Prakash
October 18, 2011 at 9:56 AM

Raj Travels said…
Raj Travels is a popular Inter-City bus service provider, serving more than 200 schedules daily across 5 states in India. Services of Raj Travels would be totally customer focused and would maintain their exclusivity. TicketGoose ease the customers to Book Bus Tickets through Online Bus Ticket Reservation by walking into its channel partner outlet which includes Corporate Sectors and Ticketing Agents.
January 4, 2013 at 4:33 PM