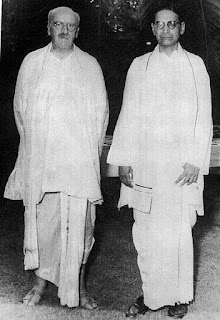 J B S Jaldane was one of the foremost biologists of the last century. He has been lovingly described as one of the “great Rascals of science.” Born to the aristocracy of Scotland, he also belonged to the aristocracy of science (he was the son of John Scott Haldane, a Scottish physiologist who taught in Oxford) . From a very early age he developed an interest in Biology and bred guinea pigs to demonstrate the truths of Mendelian Genetics. The story goes that he “often served as an experimental subject himself when he helped his father. In one childhood episode, the elder Haldane made him recite a long Shakespearean speech in the depths of a mine shaft to demonstrate the effects of rising gases. When the gasping boy finally fell to the floor, he found he could breathe the air there, a lesson that served him well in the trenches of World War I. He was educated at Eton and Oxford, but volunteered to fight in the First World War. His experiences in the trenches shocked him because he discovered that “he liked killing “
Be that as it may, he returned to the groves of academe after the war, becoming a Fellow at New College, Oxford and subsequently to the Cambridge University where he taught at Trinity College. His principal contribution ot science was his development of the field of population genetics an honour which he shared with Fischer and Wright.
Indians have a special soft corner for this great biologist because he left the University College London to join the Indian Statistical Institute, Calcutta to set up the biometrics department. He was invited to do so by P C Mahalanobis. However there was a falling out between the two men later (Mahalanobis was notoriously difficult to work with) and he left to set up the Biometrics department in Bhuvaneshwar. One of his principal contributions during the last years of his life was the guidance he offered to young Indian Scientists to whom he inculcated mathematical methods. He also worked a major populariser of science delivering innumerable lectures to Universities and other bodies as well as over the AIR. He became an Indian citizen during his Indian sojourn and died of rectal cancer in 1964. He donated his body to the Kakinara Medical College for use in scientific research.
He was a lifelong socialist, then a communist and fought for Republican Spain, Indian Independence and the rights of oppressed people worldwide. He was also a prolific writer and predicted many developments in modern science including the advent of the test tube baby as well as modern wind powered power generation. .
Even when facing death from Cancer, he wrote a comic poem which is a classic. The initial lines go like this:
"Cancer’s a Funny Thing:
I wish I had the voice of Homer
To sing of rectal carcinoma,
This kills a lot more chaps, in fact,
Than were bumped off when Troy was sacked..."
I plan to reproduce an article written by JBS Haldane in the next post. . I found it profoundly interesting and I am sure you will too.