Creators and the process of creation 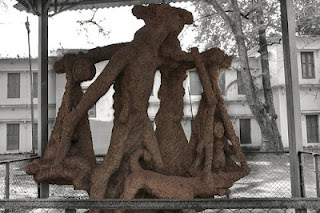 Ramkinkar's " The Santhal Family " at Santiniketan.


Creativity is a blessing that is given to only some lucky ones. There are people who can create art, sculpture and write sublime prose and poetry. They say that all Bengalis have written poems at least sometime in their lives. I certainly have, but on re reading some of the bilge that I have created, I blanch in fear that my daughter will come across these scribbling.
But those who are favoured by the Goddess Saraswati are in another league altogether. The process of creation is like giving birth. From a mixture of earth and some water, the sculptor fashions a figurine that can give pleasure to millions. When I see great paintings, or read a book of great poetry, I never fail to be awed at the creator. How do they create? I wonder.
There is a marvelous description of Ramkinkar in the process of creating in a book by Samir Sengupta. He was a friend of the great Bengali poet Shakti Chattopadhaya, who was a regular in the Kavi Sammelans held in the Medical College in the seventies. Shakti was one of the greats of the famous Hungry Generation of poets, all left wing, all passionate and all of whom wrote great poetry.
The story however is not about Shakti, but of Ramkinkar. Samir relates that they had travelled to Santiniketan in the month of Chaitra when the heat of the Bengal summer really begins to bite. They stopped over at Kinkarda’s house and immediately began a drinking bout for which both Ramkinkar and Shakti were well known and which lasted well into the night until oblivion overtook them all.
That night, Samir woke up with a hangover to end all hangovers and a terrible thirst. He saw Shakti lying dead to the world beside him and Kinkar nowhere in sight. On dragging himself out of the hut to look for water, he came upon Ramkinkar .

In Bhaswati Ghosh’s translation of his own words:
“The door led to a verandah; on the left, with his back to the door, at approximately a thirty-degree angle sat Kinkarda on a stool, stark naked. He hadn’t noticed his lungi slip off his waist. Before him, on a high stool (I don’t remember if it was a turntable or not) stood an unfinished clay sculpture; the lantern was hung on a bamboo support fixed to the ceiling. His right hand held a small fistful of clay. Sitting on the stool, Ramkinkar stared at his work—motionless. A million mosquitoes were clouding around him, but he didn’t seem to notice. His eyes had a strange, blank expression—he looked on, but didn’t seem to see with his physical eyes. It was more of what Ramakrishna had called a yogi’s eyes—he had said that when a bird sits on her eggs, the look in her eyes suggests that she was looking, but not really seeing anything; all her focus remains concentrated on her eggs. Ramkinkar had the same look in his eyes.
Even in my semi-conscious state I realized I had trespassed. I had no business there; even if I died of thirst, this wasn’t a place to ask Ramkinkar for water. And even if I did, he wouldn’t be able to offer me any. I crawled back to the room and lay down with my parched throat.
It must not have been more than a minute. I saw Ramkinkar only that one time, nearly fifty years ago—yet it is one of the few visual memories that remain immortal in my petty life. After my death, if God asks me what I saw in the world of dust and clay, I will be able to say, “I saw your contender, immersed in his art of creation.”
This is creation, given to only some immortal creators. We ordinary mortals can only watch and wonder!

(The original translation is available here.)