Pity the Poor Politicians, or Look Inwards for a Change 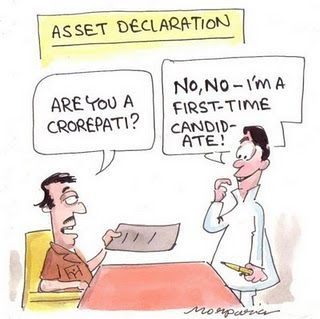 Image courtesy: Google Images
I never thought I would live to see the day, but I am beginning to have a sneaking felling of sympathy for the political class nowadays. The last straw was our Army Chief’s claim that he was offered a bribe and that he told the Defense Minister who reportedly hit his head with his hands (link). This is not to say that the incident did not happen,. Most likely it did and the bribe offer came from one of his ex colleagues in the Army who, having safely retired was working the network for his new company. In other words, this individual, who must have been at least a 3 star general in order to have access to the Army Chief was one of those men who was one of the band of men and women , we are assured repeatedly, who are the only thing that stands between us and chaos: The Indian Army. It has been apparent for quite some time that the Indian Army, while definitely a lot better than most institutions, has its share of crooks, just like anywhere else. Unfortunately it is not politically correct to say this. I know many ex Army men and others who would offer violence if you hinted that the entire Army was not as pure as driven snow. But the facts tell otherwise.
Take this selfsame Army Chief. He was the man who had a problem with his date of birth certificate. He did nothing about it for long years while in service. He even gave in writing that he accepted a particular date of birth when it was important for him ina promotion issue. But later when he realized that he could stick to his chair for a while longer, he changed his tune and went to Court. The Facebook brigade and the Press as usual gave us the impression that he was a poor dear brave soldier being victimized by the Politicians. Unfortunately the Supreme Court took very little time in throwing out the claim but nobody then apologized to the Politicians, In this case A K Anthony, who has a history of probity that few people can match. In this case, however, the politicians were empathically in the right.
Now, a couple of months later , it is obvious that this gentleman is looking for a post retirement political game to play. So he has now come up with this latest claim. What prevented him from reporting this to the police or whatever policing system there is in the Army is not known. He kept quiet about it for so long, and now he gives an interview to the press. Is it totally unconnected with his earlier failure to get his way? Will be become the Lok Sabha Candidate in the 2014 elections, or even earlier? I would bet quite a bit of money on it if I were a betting man.
Or take for instance the latest Anna Hazare episode. (See previous post here)Now he want the Government to file charges against so many ministers ( 14 I think on the last count). I have a sneaking feeling that if you really knew the facts, this number would, by right be higher. However, it is not quite clear why the Anna Hazare gang do not file any charges themselves. As citizens of India,they are well within their rights to do so. In fact if they have any evidence, it is their duty to do so. But they have not. Why? Is it because their charges are based on hearsay? Obviously so. If so how can they expect the Government to file charges? They have complained about the criminal charges on the MPs. In their haste to charge only one particular political party during the recent elections, all they did was to help, however peripherally, one of the most notoriously corrupt parties to come to power in UP. And once the people have put their stamp on the person, it is obvious that it is no easy matter to get them out. To claim that one Lokpal would magically cleanse the Augean stables suggests a risible and touching faith in this putative superman.
Another group that I really am beginning to get irritated with is the Facebook comment brigade. Everybody is finding fault with the political class. And who are the people who are doing this? I sometimes wonder at the cheek of, say doctors, complaining about anybody else when most are sold heart and soul to pharmaceutical companies. They (the companies) pay for their holidays, they pay for their household appliances and very often they are paid hard cash. Yet they complain about the politicians. Take the lawyers. They are well known as one of the most venal group of professionals, but watch them declaim on television. You would never think of it as their rolling periods tell us about the duties and deficiencies of everybody except themselves.
The principal issue is to heal oneself. Unless this is done, no Lokpal, no government can root out corruption. Would all my doctor friends agree to stop taking bribes from Pharmaceutical companies? For a start, most of the cruise business in South east Asia will go bust!!. I was told by one of the senior officials of one of these cruise companies that their biggest customers are pharmaceutical companies who buy tickets as bribes to doctors. Or our lawyer friends to stop just the petty corruption that plagues the courts. If they just did only that, the people of India would be well served.
However it is much easier to scream and rant via Facebook. To claim that if only X was removed, all would be well. It never will, until we heal ourselves. It is time we turned the spotlight on ourselves. As the quote goes: “We have seen the enemy and it is US”.