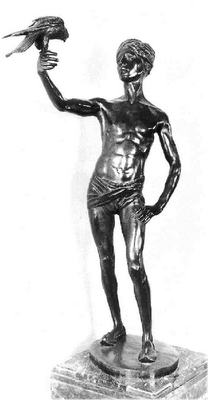 One of India’s major sculptors, sadly largely forgotten today was Fanindranath Bose. Born on the first day of 1888, in Kolkata, Fanindranath had his intial training in the arts Calcutta before he moved to Britain to further his artistic aspirations.
A short bio from internet sources to introduce this fascinating figure;

“Fanindranath Bose’s name remains absent from the histories of the ‘New Sculpture’ Movement in Britain, yet his sculptures, training and connections suggest that he was a part of this late nineteenth/early twentieth century network of sculptors who were primarily concerned with reproducing the human body in bronze. Born in India, Bose was trained at the Jubilee Art Academy and the Calcutta School of Art before moving to Europe to pursue his ambition to become a sculptor.

After failing to gain admittance to an Italian art academy or the Royal College of Art in London, Bose enrolled at the Board of Manufacturers School of Edinburgh. Scotland was to become Bose’s home. He married a Scottish woman and settled in Edinburgh where he worked for the sculptor Percy Portsmouth at the College of Art after graduating from the Board of Manufacturers School. A Stuart Prize and a travelling scholarship jointly awarded by Edinburgh University and the Bengal Government allowed Bose to spend a year on the Continent where he was heavily influenced by Rodin’s use of bronze (as indeed were a lot of the ‘New Sculptors’, including Alfred Gilbert, Hamo Thornycroft and William Goscombe John). Goscombe John bought Bose’s The Hunter after its exhibition at the Royal Academy in London in 1916. Bose had made his debut at the Royal Scottish Academy in 1913, followed by an exhibition at the Royal Academy in London with Boy in Pain the next year. He entered The Snake Charmer and The Athlete and the Hound to the RA in 1919 and 1924, respectively.
As well as having his own sculpture studio in Edinburgh, Bose was recruited by Sayaji Rao III Gaekwad, Maharaja of Baroda, to teach briefly at Baroda College whilst he was making eight sculptures for the Gaekwad’s Laxmi Vilas Palace and two for Baroda Gallery. The Gaekwad also commissioned a copy of The Hunter after seeing it in Goscombe John’s collection. Bose turned down an invitation to work on the Victoria Memorial in Calcutta. His reasons are not recorded. Bose was elected to the Royal Scottish Academy after completing a group of sculptures in St John’s Church, Perth. He died in Peebles, Scotland, aged 37 on 1 August 1926."
"His Baroda sojourn started when he was invited by Sayajirao in 1920. His bronzes in the Baroda collections, notably his Boy with Falcon ( illustrat and On the Way to Temple, reveal his unerring academic skills, surpassed by few artists of that genre in India. The Fatesingh Museum and the Museum and Picture Gallery at Baroda are the only places outside England, Scotland and Austred above) alia ('a huge memorial shrine at St John's Church in Perth') where the work of this early Indian sculptor is preserved."