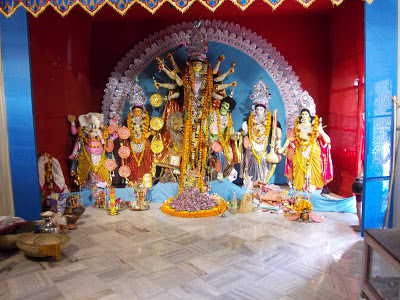 It is always a wrench to leave Kolkata Airport to take the KL flight. However, often this departure has been preceded by rude taxi drivers, fatheaded security staff and expensive but lousy coffee in the airport lounge, so one can take it in one’s stride. However this time was different.
For a change we spent a full week in Kolkata, that too during the Pujas. Kolkata is different during the Pujas. The traffic is smooth, the pedestrians are forced to keep to the pavements, the hawkers either go on leave or are removed from the pavements in many areas and of course the city is dressed up in the finery of the autumn festival. I have not been in Kolkata during the Pujas for something like a couple of decades. So, some of my memories had faded. However this time I was stuck anew with wonder at the creativity and hard work that goes into the organization of what must be one of the greatest shows on earth 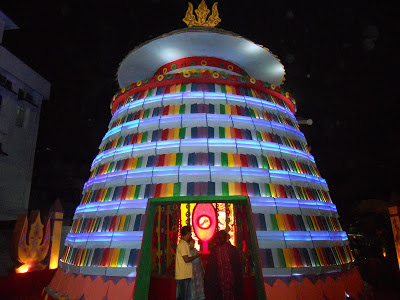 The pratimas were even better than my memories, the lighting and the pandals were mind-blowing and the city was obviously having a blast. (And so did I)
One feature that struck me as slightly novel (though it has probably been around for many years, only I have not seen it); was the Pujas that are held in the Apartment complexes which, to some extent, reproduce the spirit that was seen earlier in probashi Pujos, or in family Pujos.
I have never seen a family Pujo, but I have over the past couple of decades seen probashi Pujos and the spirit of the celebrations seemed to mimic that. I visited a cousin who was one of the livewires of the community Pujo at her apartment complex and found her immersed, together with her neighbors in a real celebration of community bonding. I liked that, I wish I had been part of something like this in my younger days.
One thing that I had promised myself was that I would visit as many friends and relatives as I could. I did that and renewed many ties that had grown rusty with non use. I met many relatives whom I knew mainly via email and Facebook and I ATE!
I ate and I ate and I ate to my heart’s content. There is no doubt, in my mind at least, that Kolkata is the culinary capital of the world. I had luchis, I had sandesh, I had fish of all varieties, shapes and sizes and I had cutlets, kobirajis and my favourite Nahoum’s brownies. I still could not find time (and space in my tummy) for several more things I had in mind, but I shall make amends on future occasions. For the time being, I am replete 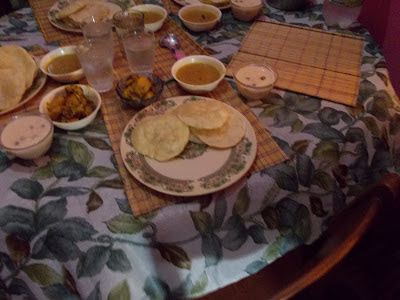 There were mercifully no newspapers for the major part of my visit, so I was spared the irritations of Kolkata’s and Bengal’s political shenanigans. Only I could not buy too many books as I usually do, as most of the stores were closed. But anyway, that was a minor irritant.
The icing on the cake was when I met a couple of Chinese girls from Malaysia on the flight to KL who had spent the Pujos in Kolkata. They had a superb time as well and they told me that they planned to come back as early as possible. I did not tell them, but that is what I plan to do as well, this time for keeps.

Unknown said…
WordPress is the most popular way for people to build a blog or a website.
Imessolution institute is a leading wordpress Training center in Kolkata and hoogly bandel.In this institute you will get professional joboriented courses.Latest & Revised course as per current industry requirements.we provides training in latest version in wordpress and with learn ftp,cpanel live project.
We also provides course php training,ecommerce website training. we have professional and talented teachers.
November 3, 2012 at 3:19 PM