Roadkills in Malaysia: A personal experience 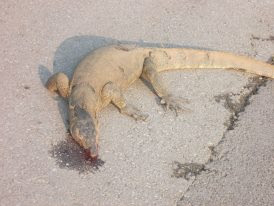 Roadkills have become a fairly common occurrence with the advent of motorized transport. As the motor car, the truck and other vehicles began to speed along highways which cut through wildlife areas, animals began to die as they were run over by speeding vehicles. The term roadkill refers to killing by motorized vehicles, but in North Bengal, the Doon area of Uttrakhand and several South Indian forests, trains are also pretty lethal for wildlife. In the Dooars in particular, elephant deaths are common and have become a regular occurrence after a broad gauge line was allowed to pierce the forest of North Bengal.
My personal acquaintance with roadkills in India was with dogs. All Indian drivers are familiar with the spectacle of a dead mongrel lying on the road, getting more and more smashed as vehicle after vehicle goes over it. I have even known sadistic drivers who liked to purposely run over dogs. However, because stray dogs are so common in India, I never really felt any great regret over the sight of such dead animals. 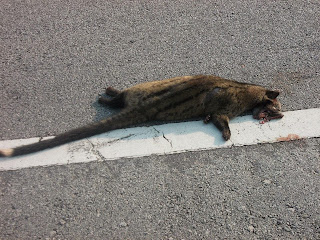 In Malaysia, however it is a different story. The boom in infrastructure has ensured that there are superb roads all over the country. Even when I penetrate remote parts of Central Peninsular Malaysia during my weekend drives, I seldom come across a road that is not smooth and wide enough for comfortable driving. Many such roads pass through forested habitats and the sight of a mongoose, or a snake or even a water monitor crossing the road is not really uncommon.
Unfortunately, the sight of road kills is also common. I will talk about some of the larger animals that I have seen dead on the road. One common animal, the civet cat, which is also known as the toddy cat has a huge range. They are found all over India, and east wards they range all over Burma, Thailand, Malaysia and the Indonesian archipelago. I am told that they have been introduced to Japan as well where they have found a niche as well. They are found even in some Calcutta paras, one friend informs me .
In Malaysia they inhabit both the forests as well as the plantations. I think they are the commonest among the larger animals to be killed on the roads. I first saw a carcass on the Morib road in September 2012. It was lying on the side of the road, obviously killed sometime back. A couple of weeks ago I saw another one, this time near Kuala Pilah in Central Malaysia. They are pretty nippy animals; I wonder why they are killed so often on the road? 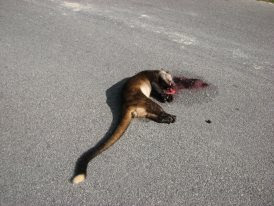 Another large animal that I saw lying dead on the road was a water monitor. This time it was during our first visit to Tasik Bera,( see here and here) the wonderful water body which is one of my favourite Malaysian destinations. The poor beast lay on the road inside the Forest Reserve killed some some idiot motorist who was speeding even in this road which leads 4 km into a fairly undisturbed forest to the lake itself. Water monitors are a common sight again in Malaysia. Even our Technology Park, where we have our lab, has a thriving population of these reptiles which live off the fish that breed in the water bodies of the Park. They are swift swimmers, but outside the water they walk awkwardly and I can imagine a careless driver running them over if they are making a crossing. I have seen dead monitors on the road near Morib as well.
But monkeys! Last week we also saw the corpse of a monkey lying on the road near Jeram Tengkek. In India the nippy langurs that we see in many roads would never have been so naïve, but here I have met with a dead cynomolgus monkey, also called the crab eating monkey lying dead at the side of a kampong road. 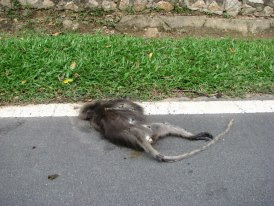 Snakes often meet their deaths on the road. So do even larger animals. I have heard or read about deer, jackals and even once a tiger dying in a traffic accident. Swallows, it has been recorded have evolved over the past few decades with smaller wings to avoid being hit by cars, I kid you not. The sad part is, that with increasing interference with the forests, such incidences are likely to multiply, until they end because there is no wildlife left! Hopefully my driving days will be long over by then.