Having Fun : Envy the Sardars 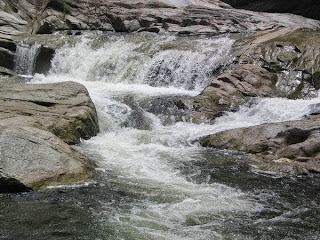 Last Sunday, we drove out to the Chamang waterfall in Pahang. It is easy to reach from KL. Just take the Gombak exit to enter the Karak Highway, go pass the exits to Genting and Berjaya Hills and exit at the Bentong exit. Just after you exit the Bentong town there is a left hand turn off to Chamang. The distance is about 10 km, from the turn off, the road is narrow, so you have to drive slowly, but that is good, because the road enters a green forest which steadily grows more dense until you reach Chamang. The waterfall has been much written about and sometimes can be dangerous as many incautious people have lost their lives here.
This time as we drove down the road, I noticed a lot of Indian men, women and youngsters: a large proportion seemed to be Sikhs. They were all walking to the falls, clad in identical blue T shirts, they were sweaty, some even seemed a little grumpy, but for the most part they seemed to be having a great time.
We reached Chamang and settled down on the rocks from where we had the best view of the waterfall. Soon, the first advance guard of the crowd reached the Falls and in about 30 minutes, most of the party was there. No Sikh company is ever complete without a friendly member who wants to talk and become acquainted. A not so young man sat beside us and told us that they had walked from the Bentong Gurudwara to the Falls for a picnic and this walk had been organized for charity: they were raising money for an orphanage. This was not the first such walk, they had organized many such, one highlight was when they had walked from Singapore to Malacca.
But soon, the entire party was complete. And then began the fun. One old gentleman immediately dived into the river and began to splash everybody else and soon a melee ensued in the water as more and more of the party dived in. The fun was infectious: they managed to get so many of their friends in the water that the river was full of plump sardarjees who had literally let their hair down and were having a whale of a time. A sing song soon started and I am sure a dance would follow. We left after a while, but I am sure the fun continued during their lunch and afterwards.

The reason why I describe this commonplace incident is that it is not commonplace in Indian communities. In India, the only community that really enjoys life seems to be the Punjabis, more particularly the Sikhs. It is common to see boisterous celebrations of festivals, of marriages and of nothing in particular. They get together, they eat together and most important they have fun together. There are no doubt weighty problems that they struggle with just like any of us, but this does not prevent them from celebrating as a community which few others in India ever do. This is particularly apparent if you travel in the Punjab. The hospitality to strangers, the always on festivities and the joy and fun that is always present does give a feeling that one is somewhere special.
In Africa and the West, we do see community celebrations when the entire community gets together to have fun. They dance, they drink, and they shout and sing and generally enjoy themselves. But do we ever? Our celebrations are family oriented rather than community oriented. And other than the tribal communities, no other group enjoys themselves with so much unconscious fervor. Perhaps the Anglo Indian community used to, but today they are such a miniscule number that they are practically invisible even in their erstwhile stronghold of Kolkata.
There must be some weighty social reason for this. I do not know. Perhaps Guru Govind Singh inculcated it when he wielded them together to become the Khalsa. Perhaps the air of the Punjab has something to do with it. Perhaps it is just that they have realised that life is meant to be enjoyed.
Whatever it may be, I could not but feel jealous of the group. I could not imagine that I would in a public place, dance and sing and play the fool. But more fool me, because when I saw them, I realized that they were having the time of their lives and I wished I had the lack of inhibition to join in.
Jo bole so Nihal Sat Sri Akaal .

akdcts said…
Gurdip in Facebook:
beautifully written as usual. I really enjoy your posts and your blogs. You have a way with words that is simply out if this world. I missed your posts and I was experiencing withdrawal symptoms. But I am enjoying your posts once again. And BTW, I did not enjoy this particular blog because it was on Sikhs but because it is beautifully written and reflects the true nature of the Sikhs. Like anyone else, I have had my fair share of troubles in life but I don't let that get to me. I enjoy "life to the lees" as described by William Shakespeare in Macbeth. Perhaps this stems from Guru Nanak's famous quote " Nanak Dukhiya Sab Sansaar" which translates literally to "Everyone in this world has problems and issues". Because Sikhs believe that they are not the only ones with problems, they take everything relatively lightly and lead happy boisterous lives. It is difficult but they would rather enjoy than fret and frown. That is my take on the reason why we enjoy so much.
June 23, 2014 at 1:18 PM

Iftekhar Ahsan said…
I like your posts mostly but I would certainly like to object to the fact that you say other communities don't enjoy their celebrations as much or as well.
Although I like the Punjabis too but to say that there is only one way to enjoy or celebrate is to oversimplify life.
To say that the Bengalis don't have a ball at the Durga Puja, or the Biharis at the Chhat Puja or the Muslims (all sorts) on Eid would be a misstatement.
Keep the good work going though. I appreciate your posts mostly.
June 24, 2014 at 4:40 PM