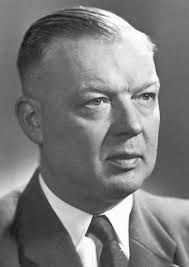 Werner Forssman was born in Berlin in 1904. He studied in school and in University at Berlin and remained there throughout the First World War during which he lost his father. Post World war Germany was a horrific place, the country was ravaged by the demands of the victorious Allies. He was lucky to be funded by one of his uncles who made it possible for him to study medicine in the University of Berlin. But qualifying as a doctor was the least of his worries: getting a job was very difficult in the Germany of those days. He initially had hoped to do Internal medicine, but this involved long stints at unpaid assistantships, which he could not afford.
He thus turned to a surgical trainee post at the Auguste Viktoria Red Cross hospital at Eberwalde, a provincial town 45 miles from Berlin. It was here that he first proposed what would become the basis of right heart catheterization. He suggested that it would be possible to send a catheter from the veins of the arm right up to the heart and use this to measure pressure or take blood samples from the heart. He wanted to try this procedure on some patients. His superiors got wind of his ideas and strictly forbad him to do try anything of the sort. 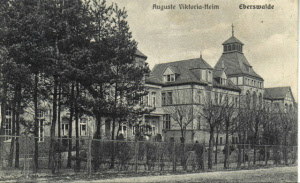 The Auguste Viktoria hospital where Forssmann did his pioneering work

Nothing daunted, he decided to try the experiment on himself. He tried it one afternoon, pushing the catheter as much as 14 inches into the vein before he lost his nerve and he pulled out the catheter.
It took him two weeks to recover his resolve. He utilized his lunch break to sneak into the operating room; now he had an accomplice, an OR nurse, Gerda Ditzen. Gerda refused to help him unless he did the procedure on her. He agreed, strapped her down securely and then, ignoring her protests he rolled up his left sleeve and infiltrated the front of his elbow with local anesthesia, made a skin incision, hooked out the antecubital vein and after incising it, inserted the tip of a ureteric catheter which had been earlier stored in sterile olive oil. He advanced the catheter into the vein as far as possible without resistance and then walked to the radiology department. Those were the days before image intensifiers, so he had to position himself against a fluoroscopic screening apparatus. Gerda helped him by holding up a mirror while he inserted the catheter into the right atrium and took an X ray to confirm this. He then walked back to the OR, removed the catheter and stitched the wound. Other than some slight sterile inflammation he suffered no ill effects. He published this in Klin Wochenschsr in 1929.

Apparently, the head clinician at Eberswalde, although initially very annoyed, recognized the importance of Werner's discovery when shown the X-rays; he allowed Forssmann to carry out another catheterization on a terminally ill woman whose condition improved after being given drugs in this way. However at the time of the publication of his article he was back in Berlin working for the Berliner Charité Hospital, under the great Ferdinand Sauerbruch. This did not last because once Sauerbruch saw his paper, he was dismissed for continuing without his approval. Sauerbruch commented, "You certainly can't begin surgery in that manner". In fact, the story goes, he was told that he might be competent to lecture at a circus, but not at a respectable German University.
He later specialized in Urology, joined the Nazi Party and escaping the Russian soldiers at the end of the Second World War by swimming across the River Elbe with his shoes tied around his neck, surrendered to the American army. His family (his wife was a urologist as well) had survived the war by fleeing Berlin to live in a small village in the Black Forest region, and he was united with them and he initially set up a family practice, returning to his specialty in 1950 when he found a urology post again.
During the tumultuous late thirties and forties, he had been cut off from medical developments elsewhere in the world and was thus unaware that his much despised method had been used by two researchers in the United States to investigate many problems of cardiovascular physiology and diagnostics. They were, of course, French born Andre Cournand and Dickinson Richards, who, at the BelleVue hospital in New York, pion
eered the use of this technique for these purposes. The technique had, in fact, spread worldwide and by 1945, 1200 right heart catheterizations had been done without any mishaps. 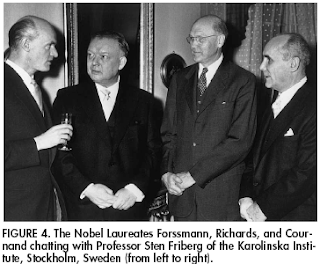 After the Nobel award, he was encouraged by his colleagues to enter the field of experimental cardiology but he declined as he felt that he was too remote from that subject. However he wrote a much acclaimed book: “Experiments on Myself” which described his efforts. 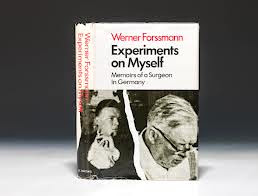 He continued his urology practice until he retired in 1969. He then moved back to his Black Forest village where he died of a heart attack in 1979, aged 74, survived by his wife and six children.
( All photographs from the internet)
catheterisation Right heart Werner Forssmann