As I have mentioned earlier, we had not made any plans whatsoever. Not for us the mundane details of planning our route or our accommodation. Swapanda had assured me that he had a map of the undivided Midnapur District, a detailed map that we would use to plan our further course journeys.  Unfortunately when Swapanda opened the map at Midnapur station we discovered that he had packed the map of Madhya Pradesh instead. This too was a map dating back to those days before Chattisgarh had been separated from the state. Unless we planned to go back to Kharagpur and take a Mumbai bound train and I am not saying that we did not consider it for some moments, we had no option but to pack it away at the bottom of Swapanda’s bag and depend upon good old Google Maps. In the event, it served us well.


The Gopegarh Ecopark was opened to the public in 2000. It is a large area, exactly how large; I am unable to say as I was unable to discover any information on their display boards. However, it is on a highland and the land falls rapidly towards the Kangsabati River which flows about 500 meters away as the crow flies. Originally densely forested, the Park has a historical site of interest. This is the site of the ruins of a fort constructed in premodern times by the Gope Rajahs, who were basically zamindars of this area. As I have mentioned earlier, this was no man’s land during the historical period between the rule of the Independent Bengal Nawabs and even before that and the advent of British rule. That was when this region saw the invading Marathas fight the Nawab’s soldiers and it was every man for himself. The fort is now in ruins and there seems to have been no major attempts to restore it; there is instead a plastered notice all over its frontage proclaiming it to be a heritage building. Why it was thought necessary to mutilate the building itself is a mystery. There is another legend associated with this structure or at least the site which the fort occupies. It was, according to local legend the place where the Virat Rajah of the Mahabharat fame had his cowshed. The Pandavas are supposed to have visited this spot during their wanderings in the forest during their exile. 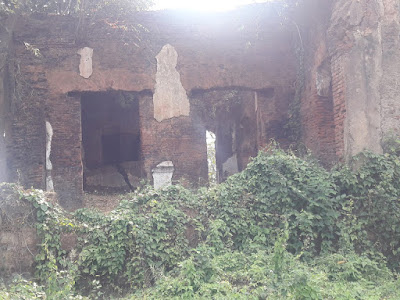 Gopegarh has a great variety of diverse flora, thought the fauna is limited. The birdlife is varied and very prolific. We saw a wide variety of birds, mostly our common garden birds, but also a selection of less common varieties. We heard the first of the brainfever birds calls this season here and saw the bird calling lustily from one of the branches of a mango tree. But the fauna is very diverse. There have been several studies of the plant life of Gopegah and this has shown up a wide variety of medicinal plants, dye producing plants and many endangered plants as well. The plateau on which the ecopark lies has a profusion of sal. There are in addition large numbers of teak, arjun, aksha, eucalyptus and many others. Some are the residue of the dry deciduous forest that this site used to be but most have been planted by the forest department. There were some cashew trees just beginning to bloom. I was a little puzzled, I thought that cashew would be confined to East Midnapur.

We arrived at the gate no 1. Here we had to pay the entrance fees which were a measly amount, perhaps Rs 5, I do not remember. The plan was that we would explore it and then our toto driver would take us to some more tourist spots in Midnapur, but as soon as we entered the Ecopark, we were mesmerized. From the gate, a long avenue lined by willows led us into the park proper.

There were forests in both sides of the avenue and ochre paths led off to hidden nooks and to various picnic sheds which were probably in heavy demand during the picnic season. There were few people. It was a working day after all and the only other company we had was a gang of youngsters, who we later realized had come to celebrate the end of the Madhyamik examinations. 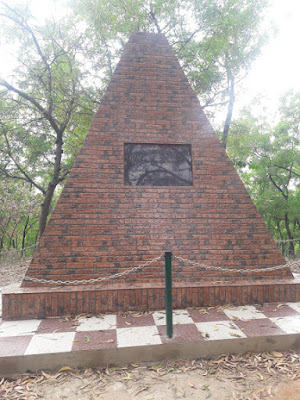 Down the avenue we came upon a monument that recorded that this spot was one of the points used in the Great Trigonometric Survey which, in the nineteenth century had mapped the entire subcontinent in a scientific manner for the first time. I could imagine the intrepid geographers camping in what must have been a dense jungle at that time carefully making observations with the help of instruments that had been carried over long distances. Further along we came upon the ruins of the Gope Raja’s fort. As I have indicated earlier, the building is dilapidated, overrun with vegetation and difficult to access. We peeped in, afraid to go further for fear of reptiles. Again I used my imagination to try to recreate in my mind what to must have been in its heyday. Not a major fort, I think, but the headquarters of a minor landlord of the region, was my guess.
Further down the avenue was a nursery and a garden which was still awash with flowers, but one could sense that the peak flower season had gone. There were some lovely roses and the nursery was well maintained and it appeared that much work went on to raise the saplings which would go to replenish the forest. There are a couple of cottages here which are available for the public to stay, in addition, there is a watch tower. The tower gives a panoramic view of the park and is an excellent place for birdwatching. Unfortunately, it was also very prized by the youngsters I was talking about and they (rightly) seemed to resent the unwelcome interference to what was evidently a locale reserved for courting couples.
Swapanda in the meanwhile had got into a conversation with some forest guards who were hanging around the cottages. It appeared that there was a meeting of higher-ups from the forest department and the big bosses were at lunch. On enquiring if we could stay in the cottages tonight, we were informed that we should have made our reservations online. However, just as we were resigning ourselves to disappointment, succor arrived in the form of a young lady, the Forest ranger who was in charge of this park.  I was very impressed by this young girl. She was smartly dressed, seemed very knowledgeable  and was evidently efficient. Not only that, but she was also ready to cut through the red tape and allotted one of the rooms to us for tonight. There is hope for West Bengal yet if this sort of officer is being recruited. I was pleasantly surprised. May she rise to be Chief Conservator or whatever the highest rank is in her service!

We immediately abandoned our plans to see anything else of Midnapur and retrieved our luggage from the toto, paid off the driver and inspected our lodgings. We had taken a non air conditioned room which cost us just Rs 500. For this we had a sort of day room, leading down from this was a double bedroom together with a verandah that overlooked a forested slope. The cleanliness left much to be desired and the maintenance has not been of the best, but they did have (reasonably) clean sheets, a threadbare towel was provided and most important of all, a mosquito net. We have faced much worse in our travels and so we were content and frankly for Rs 500, it was a bargain.

siva said…
You have done a great job. I will definitely dig it and personally recommend to my friends. I am confident they will be benefited from this site.
rizbuz
February 26, 2021 at 1:46 PM