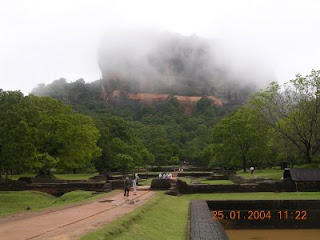 We sweated up the rock. Steps, some ancient, some built fairly recently (In 1934!). At places modern steel stairways have been placed and one such stairway leads to the fresco gallery. The colours are magnificent and the artwork really outstanding. We then crossed the mirror wall and examined the graffiti. Still seen clearly in the glaze are words written by a tourist like me, but more than a thousand years ago. The handwriting was excellent, unlike the” Roma Loves Sekhar” types we see today cluttering up innumerable Indian monuments.
Beyond the wall lies a platform. At the base of the platform are the enormous lion paws between which we have to pass to reach the summit. In Kashyap’s time, the path lead inside the lion’s mouth to the upper reaches. However the rest of the lion has disappeared and only the paws remain to tell us of its magnificence. This lion it was that named the rock Sigiriya: the lion rock. A stiff climb later and we were at the summit. Here the four acre area was covered by palaces, today only the foundations remain. On three sides, even today are the dense forests and it was here on a stone throne that still exists that Kashyap sat, watching the dancing girls perform in a series of terraced gardens below.
Kashyap’s story however does not have a happy ending. 18 years after he sat on the throne, his half brother came across the jungles with a huge army of elephants to claim his kingdom. Kashyap was trapped in a swamp during the epic battle that followed and his troops crossed over to the other side (as all sensible troops in the subcontinent always did as soon as they knew which way the wind was blowing) and Kashyap committed suicide.
Later the fortress was the refuge of Buddhist monks who contemplated Nirvana in the same caves that had once housed Kashyap’s soldiers. Gradually however the site was abandoned and after the 14th century it was a distant military outpost of the Kingdom of Kandy. Even later, the jungle took over and the site was, as I have already mentioned rediscovered by British archeologists chief of whom was H C P Bell. One recent study has claimed that the area has been under almost continuous occupation for 20, 000 years which leads one to wonder if there might be something in the Ravana’s place story after all!
Coming down, Sunil pointed out other places where the king used to hold court, relax with friends, and dispense justice. The rain had stopped and a cool breeze transformed the ruins to the king’s pleasure gardens once more. Down the rock our car awaited. 3 hours later we were in Colombo.
travel