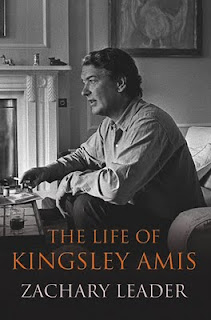 I just finished reading a biography of Kingsley Amis, the English writer, principally known as a novelist but also an anthologist, minor poet and prolific reviewer and writer in newspapers and magazines. It was published in 2006 from London and is written by Zachary Leader, who is Professor of English in Roehampton University. He was a friend of Kingsley’s son, Martin, also a novelist and has earlier edited Kingsley’s letters as well.
I picked up the book at the local Carrefour Supermarket where they were selling large quantities of books at throwaway prices. This 1000 page tome cost me RM 5 (Approx Rs 65). I don’t really know why I picked it up; I have never read any of his books. I once made a brave attempt to read Lucky Jim, after having borrowed it from the British Council Library in Calcutta, but never got past the first few chapters. I don’t know why, but modern British novelists leave me cold. The only novelists writing in English I like seem to be non British, at least by birth. Ishiguro, Amitava Ghosh, Jhumpa Lahiri and Vikram Seth are my current favorites, though my reading can only be considered desultory at best. I know that i am showing a deplorable provincialism in my choice, but that is the way it is!
The point I was making is that despite my lack of knowledge of the writings of Amis, I found the biography simply unputdownable. Earlier too, I have read biographies of people whom I knew little about, but found the writing absolutely fascinating. Leader has researched is life very thoroughly and now I have a clear picture of thing Amis, as they say, warts and all. The art of biography is one that the British have mastered. There are literally hundreds of biographies of every figure well known and not so well known, which are well researched, well written and give you a clear picture of not just the life but the times of the subject.
This is something that is absolutely lacking in India, or even in all of Asia. We either write hagiographies, or ignore all people except two or three figures. For instance, in the Bengali language, there are many biographies of Tagore,some of Subhas Bose, but almost none of any other literary or political or cultural figure. I can only remember one biography of the Poet Michael Madhusudhan Dutta written by Ghulam Murshed, which was originally serialized in Desh, the Bengali magazine, and which, I am told, has now been translated into English and published by OUP. Nobody in India has written a good biography of even the non Nehru family Prime Ministers of India. If you want to know anything about, say, Lal Bahadur Shastri, you will have to look up the Publication Divisions’ hagiography.
One reason, of course is the extreme sensitivity of Indians of all regions and religions to anything remotely critical written about any public figure. Imagine writing a biography of Ambedkar in which you suggest that he is anything but a cross between Jesus Christ and the Lord Buddha. There will be riots, you might be prosecuted under the Scheduled Castes Act and your house burned down. And all by idiots who have never read your book and would not be able to read it if they tried. Or for that matter imagine writing a book on Subhas Bose in West Bengal criticizing his policies. You would be crazy to even try.
However there are many figures who do deserve biographies written on them and their times. I can think of literary figures like Atul Prosad Sen and D L Roy in Bengal, politicians like Annadurai in Tamil Nadu, Namboodiripad in Kerala, scientists like Sarabhai or Bhaba who deserve to be remembered in biographies ( as opposed to hagiographies) This can lead to a flowering of research and a renewed interest in men and women who made India. The present political dispensation believes that everything in India originated from the fount of the Nehru family. It may be in their interest to make such a projection, but there is no reason why independent scholars cannot choose other subjects.
The 150 birth anniversary of Tagore is approaching. It will the occasion of a lot of scholarship, much of it repetitive on the great poet. However it would be wonderful if some of the energies of Tagoreans were diverted to writing biographies of the many men and women who were attracted to Santiniketan, to his ideals and his writings. There is , to my knowledge no decent biography of even Rathindranath, his son, or Abanindranath who is the father of modern painting in India, let alone people like Kalimohan Ghosh, Santideb Ghosh and many others who made Santiniketan what it is.
One of these days I plan to write a biography of Sir Asutosh Mukherjee who built Calcutta University to its present status. He was instrumental in bringing a number of scholars, including C V Raman to work and research here to produce scientific work of a standard that all the Government’s horses and all the Government’s men have been unable to do since. What makes him very human to my eyes is that he was apparently diabetic, and denied his favourite sweets at home, like a true Bengali, he stopped his carriage at the Bhim Nag Confectioners’ on his way back from the University and polished off a goodly number before he reached home. I don’t know whether this story is true or not, but I like to think it is. If you read any of the biographies that have been written of great and not so great men, you would think that they were saints and monks and beyond any human emotions or frailties. Here is hoping that we will see some real biographies of Indian notables!
In the meanwhile, we have to make do by reading the marvelous ones that the British seem to produce in an unending stream!
Biography Indians

Nipon said…
This was an eye-opener. Two things I learnt. One, the British have mastered the art of biography. Two, the same is languishing in India. I completely agree with the fact that there should be biographies of not just a handful of people. If Nehru family is portrayed as the founder of India, it's a real shame for there are so many other people who have played instrumental roles in shaping our nation!
October 1, 2009 at 2:53 AM