The Jews of Calcutta 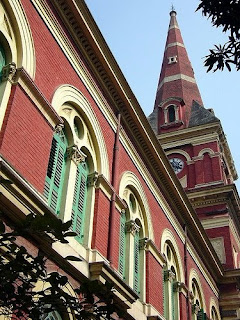 The Ezra Hospital was tucked away along the Colootola road adjacent to the Calcutta University complex. It was of little concern to us as students, as it housed the ENT Department and the Chest Department which consumed very little of our time during those days. However it housed the Students’ Ward as well and here students used to repair occasionally to while away their blues after a rotten examination or a dead love affair. No consultant ever ever dreamt of coming to see you and only the nurses used to check your temperature twice a day. There was ample time for smoking and adda and when you had tired of the pleasures of a sort of solitude, you requested the House Physician to discharge you so that you could go back to the hostel. When we became Interns and House Surgeons, the Ezra Block was known for its quietness and lack of the usual hustle and bustle that was the usual scene in all other wards of the Medical College. , The patients either had had a mastoidectomy or a tonsillectomy and did not need much looking after, or were long term inhabitants of the TB ward. The nurses there thus had lots of leisure to entertain the housemen and many a love affair blossomed in those hallowed premises.
The Ezra Ward was however of historical importance. It was opened in 1887, though one source claims that patients were not admitted in it till the following year. It was the gift of a Jewish lady
Mrs. Mozelle E. D. J. Ezra in memory of her husband who was the king of real estate in the Calcutta of the mid nineteenth century. There used to be a Jewish ward in those days, reserved for Jews, I have seen it in use only once in my days at the College when a young Jewish girl, probably one of the last in Calcutta was admitted for appendicectomy. Her name was perhaps Rebecca. I am not sure about her name, but I clearly do remember that she was extremely pretty. She told me that she was leaving for Canada in a few months time.
The other Jew that all Calcutta knows is of course, David Nahoum, who still runs the Confectionery shop that his grandfather founded in 1874. It is the place where we used to get our birthday cakes and we went there for our children’s cakes as well. The decor and its ambiance has remained the same ever since I can remember, though it has been quite awhile since I was last there. Gama’s where my mother always bought her bread when in New Market, closed down some years ago, probably the last of the family passed away and his heirs were all in Israel.
That has been the story of Calcutta Jews after independence, a flight to Israel or to the West. They however left behind a history dating back to 1790, when Shalom Aaron Copen came to Calcutta from Baghdad and set of the trend of Bagdadi Jews (Iraqi Jews ) settling in Calcutta. They were consummate businessmen and great traders and many of them began to trade in Murshidabad silks and Dacca muslin to the markets of what is now known as the Middle East.
Later members of the community were not above participating in the opium trade to China and in fact any trade that turned in an honest profit. When the opium trade came to a halt following an outcry in England against the rank hypocrisy of a British East Indian Company forcing opium down the throats of an unwilling Chinese population, many of them turned to Real Estate and took over much of the real estate business in the European heart of Calcutta. The community reached its peak in the early twentieth century as they built synagogues, including the Beth El. This was considered to be the most imposing synagogue in the East when it was built in the 1850s and the Maghen David which was built in the Italian style with the pillars being shipped in, it is alleged , from Paris. (see pic, borrowed from Flickr).
The population was always low, not more than 3000 at its peak but it was by all accounts a lively community which formed an important part of the mosaic of Calcutta. Now it is said that less than 10 survive in Calcutta so that the quorum for prayers at the Synagogue is never obtained.
It is sad to think that such a vigorous community does not exist in Calcutta nay more, but when native sons are leaving in droves, what can hold them back in a city of uncertain future?
Calcutta Jews

Nipon said…
Sir, it was a treat to read this post. You have painted a wonderful picture indeed with words. It is diversity that makes Calcutta unique. Thanks for all those facts esp the one on Ezra Hospital.
October 1, 2009 at 2:08 AM

Anonymous said…
As an expatriate from Kolkata and alimni of CMC&H, thanks for this memoir of Ezra ward and Nahoum.
December 31, 2010 at 12:25 AM