Birds in My Garden

July 13, 2011
The Brahminy kite is a fairly common raptor in India as well as in South East Asia. In fact the island of Langkawi, one of the favourite destinations for holiday makers in Malaysia is named after this bird which is also claimed to be the original for the Garuda, the mythical bird which is the state emblem for Indonesia. A coastal bird, its range extends from the Indian subcontinent up to New South Wales in Australia. However it is mainly in Coastal Southern India, Sri Lanka and South East Asia that it really has its home.
The reason why I brought this up is because there is a pair of these kites roosting in a tree just below the verandah of my flat in Bukit Jalil. Just across the wall is one of the greens of the Bukit Jalil Golf Course and this hole is ringed by some really majestic trees. We had noticed a pair of kites coming to this area occasionally, but it was late last year that we really noticed that they were roosting in a tree about 150 yards away from my verandah. Now, over the past few months they have shifted base to another tree closer to my verandah, so close that if I Jumped , I would be able to land on top of that tree ( though with disastrous consequences both for me and the tree).
What I was amazed to notice is that the pair of birds enter the tree and leave it at practically the same time very day. I look upon it a show as good as anything that the KL Bird Park can put up as I stand on my verandah in the morning and the evening. At 7 AM give or take 2 minutes, the first of the pair leaves its roost and flies across to the opposite side of the green and sits atop another tree for a few minutes, before flying off into the distance. Just 3 2 minutes later, the second bird now emerges, and this one takes off immediately to the West towards a clump of trees that I can see in the distance until I lose sight of it.
In the evening the show starts at about 7.25 Pm come rain or shine. Initially one of the birds comes to rest in the tree on the opposite side of the green and is sometimes, though not always accompanied by its mate. At exactly 7.32 PM, give or take a maximum of 1 minute, first one and then the next flies across the course to the tree in which it will roost. The evening timing is so exact that I sometimes find it difficult to believe that body clocks can be so accurate.
The maximum variation that I have seen in their movements isi in the mornings, when on one occasion the second bird did not leave its resting place till 7.09 AM, but in most cases, they have left their roost by 7.05 AM. In the evenings, sometimes they make a few circles of the golf course before they zero in on their favourite tree, but in the mornings they waste little time in setting off, it is difficult to avoid thinking that they are going off to work and have no time to waste!.
There are a host of other birds , sunbirds which occasionally visit my verandah, several species of Mynah, swifts, pigeons and sparrows to name a few. The black headed oriole also makes an appearance occasionally, its yellow flashing about the trees like a jet of colour. Someday, I have promised myself I will seriously try to catalogue these birds. In the meanwhile I just enjoy the show!
( The two pictures were taken my daughter when she was here, one is the two Brahminy kites I refer to, the other is of a sunbird ( I cannot say which exact species) which comes to my verandah of an occasional morning.) 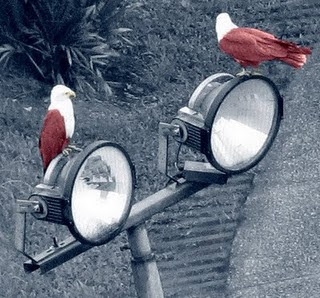