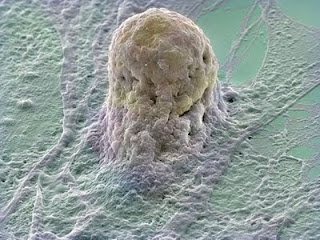 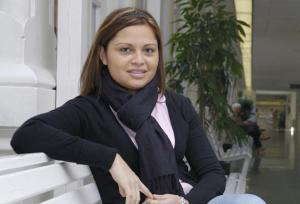 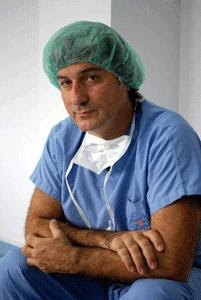 The pictures are of an embryonic stem cell, Claudia Castillino and Professor Macciarini

There is a report this morning of the first artificial organ transfer in humans. Prof Macciarini who was earlier with the Hospital Clinic at Barcelona but now works in the Karolinska Institute in Sweden did this pioneering surgery. The world is familiar with what he had done earlier for Claudia Castillo. Claudia was a Columbian immigrant to Spain who developed a tracheal stricture following a tubercular infection. She was breathless and was unable to work and look after her children. Dr Macciarini used a donor cadaver trachea and denatured it of its proteins and then used stem cells to grow the tissue back on the graft. This made it compatible with the patient and he then operated on Claudia replacing the diseased trachea and giving her a new life. This was in 2008 and it created a sensation when this report was published in the Lancet that year.
The good professor has continued his work to a logical conclusion. The need for a cadaveric donor was a severe constraint in making this sort of surgery available to all comers. So in a logical advance, he has now transplanted a graft made of artificial material, impregnated with tissue derived from stem cells. The patient, a 36 year old African Ph D student Andemariam Beyene who now works in Ireland, was suffering from a golf ball sized tracheal tumor which threatened to suffocate him. Dr Macciarini was assisted by the University College, London where careful scans of the trachea enabled engineers to craft an exact replica of the trachea made out of glass, and this was then impregnated with stem cells obtained from the bone marrow of the patient to produce a trachea which was them implanted.
The achievement is mindboggling to say the least. Not only has the first artificial organ been produced, the successful transplantation has also put to rest any concerns about its compatibility to the human tissue. It now only remains to check on its durability, that is how long it will last and whether there will be any complications.
It is safe to say that this will rank as one of the important achievements of this century in the field of organ transplant. It is also a huge boost to the stem cell industry as it proves that stem cells can be used to replace many tissues of the human body and successfully re create an organ. This was shown earlier in a cadaveric transplant, but the fact that his can be done also in an artificial construct will give a new dimension to the work going on in this area.
It is too early to say, but his may be the breakthrough that will spawn many other organs Imagine a scaffold in which you transplant renal cells to create an artificial kidney. No rejection, no need for expensive anti rejection drugs and no fear of infection. Imagine the ultimate Holy Grail, a heart that beats, all put together with some plastic and the magic of stem cells.
The twentieth century may be the century when the science fiction of a bionic man is turned to a reality.
Hats off to all involved in this project!
Organ Transplant. science