January 15, 2012
Raj had asked me during my last visit to go to the Neora Valley Jungle camp. Unfortunately there was no time then, but this time when I was I Siliguri, he again repeated his recommendation. While I had no real plans to go there, I agreed. One reason was, of course, that the weather had been marvelous during the past couple of days in Siliguri and the Kanchenjunga was visible clearly from our flat. This view, of course was just a sliver, and a pale imitation of the real thing that one can see from the hills.
We started at 7 AM on a clear day. The sky was blue, the air was crisp and the K was clear in the sky. Down the Sevoke Road we went in Ramesh’s Sumo into the Mahananda Forest. The Woods were lovely dark and deep as usual, but today we had another date, and so we sped on past the Mahananda Sanctuary past the Sevoke Bridge towards Kalimpong. We have been on this road countless times, but today we deviated from the main road to Sikkim to climb the 16 km to Mongpo. This was one spot in the hills that we had wanted to go so many times, but failed to go for some reason or other. As somebody superstitious would say, “The time had never been right for us”. Today the travel gods decided that we should see Mongpo.
Mongpo, of course is known to all Bengalis because of its association with Rabindranath. He stayed there as the guest of Dr M M Sen, who was the Director of the Cinchona Research Plantation whose headquarters and factory was in Mongpo. He made two visits on consecutive years 1928 1and 1939. He lived in a bungalow, picturesquely situated on the hillside overlooking the hills of Sikkim. His stay has been chronicled by Dr Sen’s wife Maitrayee Devi in her book “ Mongpo te Rabindranath”, later translated into English by the author as “Tagore By the Fireside.” (You can read a review here) 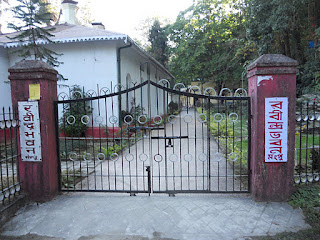 The bungalow has been converted into a memorial to the Poet and the Cinchona factory still exists, though now almost non functional. However, Nature has remained almost the same. Monpo is the home of the Orange. Orange orchards dot the hillsides, and driving up to the town one passes several orchards. Many have had their fruit plucked already, but many are still, well “orange “with fruit. We stop at one orchard and persuade the teenaged ? owner to give us some of the fruit. Needless to say, they are delicious. 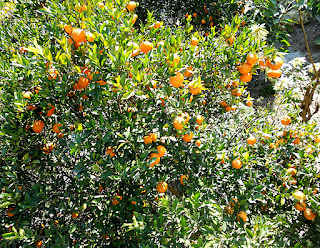 There is a bust of the Poet in the garden and the house still has some of the furniture he had used. It is not difficult to imagine him sitting on the verandah or in the front garden, enjoying the sunshine as he wrote. The museum as it now is not well maintained. It has possibly suffered from the unrest in the hills. Now it has a new coat of paint, possibly hastily done before the Poet’s 150th anniversary, but it could be much better. 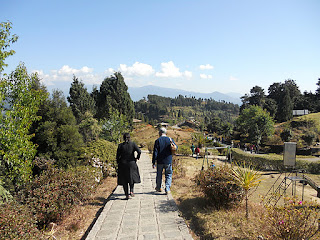 Next stop Kalimpong, or rather Delo. Delo is a garden laid out on the top of a hill with the most sublime view of the Kanchenjunga range. By now clouds had begun to cover the lower reaches of the mountains, but the peaks remained proudly aloft. There is a seedy looking Tourist Lodge here, but with sublime views, but as is usual with Indian and particularly West Bengal tourist spots, there is no toilet. Or rather there is one, but if you are brave enough to use it you are a better (or more desperate) man (or woman) than I am. It was here that we had the most marvelous snack. We have had it earlier in Nepal, and my daughter is very familiar with it from her long Sikkim stint, but I was glad to renew my acquaintance with it after a long time. Made from Moog dal and the most delicious sauces phepla is out of the world, The lady who was selling it from a small shop near the entrance of the Delo gardens was worth a picture in her own right. 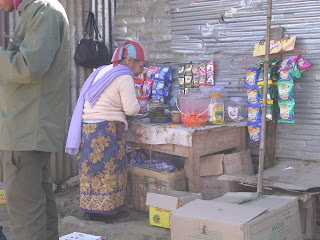