More on the Obedient Wives.

January 06, 2012
This is just to update you on the Obedient Wives Club.
The club came out with a prospective best seller. Titled “Islamic Sex Fighting Against Jews To Return Islamic Sex To The World,”, and priced at RM 50 (approx Rs 800) this 115 page manual was designed to teach the Muslim woman to satisfy her husband so that he did not stray. Readers will remember that that one of the prime objectives of the club was to teach women to be “first class prostitutes”. The idea was that with such bounties at home, men would not frequent brothels or indulge in other adulterous relationships and this would be a huge blow for the happy family. Unfortunately, nobody I know has read a copy so that the distinctions between Jewish sex and the Islamic variety will remain hidden. The Club authorities have determined that only 10% of wives can satisfy their husbands and this book is an attempt to fill the 90% gap that remains.
The Malaysian authorities, spoilsports as they are, banned the book. A spokesman for the Malaysian Home Ministry said that the Islamic affairs department of the Government had recommended this ban on the grounds that it would confuse Malaysian Muslims about what constitutes acceptable religious teaching. If found with a copy of the book, the authorities could fine the culprit up to RM 5000 (approximately Rs 80,000) quite a huge sum! The field, however, is open I presume, for the publication to take place in some licentious Western country so that the Islamic Women of the world are not deprived of its precious advice. There is a London branch of the club, incidentally, or at least a meeting had been called on the 23rd November to start one. I am not sure that anybody attended. 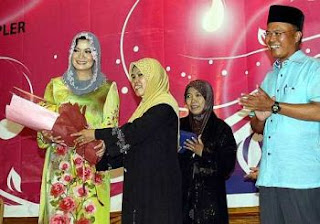 .
Some of the questions and answers are
“So, how does a woman become a sex goddess?” I asked Dr Rohaya at the Perangsang Templer Golf Club in Rawang, where the obedient wives were preparing for their club’s launch on June 4.
“We will teach them techniques,” said Dr Rohaya without blushing.
Blushing, I asked, “What sex tips?”
“You ask him first what he likes, then you ask yourself what you like. You can’t have two heads in the house,” she said.” Wow!!
Spake another member:
What do you think of (Perkasa president Datuk) Ibrahim Ali’s statement that when a man has the need and his wife is cooking, she has to stop cooking?” I asked.
“I agree with him as God created Eve for the needs of a man,” ex¬¬plained Fauziah, who is a third wife and proud of it.
I will keep you posted on further developments. All those who want a copy of the manual can apply to the International headquarters of the club. And I don’t know where it is!!