Should We Avoid Over Experienced Surgeons? 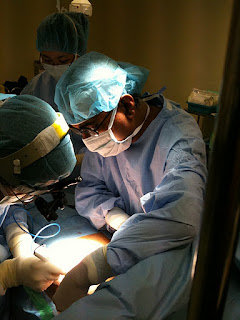 An important article was published in the British Medical Journal on the 10th January. Authored by a group of French surgeons (the Cathay Group), this study examined the association between surgeons’ experience and their complication rates. In other words they wanted to gather some scientific evidence to prove or disprove the contention that the more experienced the surgeon, the less likely he is to have complications.It can be read here.
To do this, they used the specific instance of thyroid surgery. This form of surgery has not substantially changed for several decades and it is associated with specific complications which can be fairly easily defined. These are, of course, injury to the laryngeal nerve and damage to the parathyroid glands both of which are dreaded complications after thyroid surgery.
The study analysed 3574 thyroid operations done by 28 surgeons over a period of one year. They then used sophisticated statistical tools to examine the relation between the rate of complications and the experience of the surgeon. They tried to eliminate bias that might be caused because, for instance, experienced surgeons operation only on more complicated cases.
The results were not entirely unexpected. It has already been reported that major cardiac surgery done by surgeons more than 20 years in the profession have poorer results that those done by their younger colleagues. This was found to be true in the present study as well. 20 years or more of practice was fund to be associated with a significantly larger probability of complications. Thus the skill levels of surgeons seem to increase over the years, reach a plateau at the 10-20 year practice level and then decrease subsequently. The authors have opined that even very skilled surgeons need to mentally and technically renew themselves if they are to maintain performances over long periods.
This study reminds me of another article that I had read in the New Yorker late last year. Atul Gawande, the Indian born surgeon who has written many superb books chronicling his surgical experiences, was the author of this piece. Here he describes his experience of employing a coach to improve his skill levels as a surgeon. He rightly points out that if great tennis players need coaches to tell them where they are going wrong, there is no reason to believe that surgeons would not be benefited by having a coach who would observe them in action in the operating room and point out to them faults, which might be minor in themselves, but can make the difference between an uncomplicated surgery and a surgical disaster. Dr Gawande used one of his teachers to come in and examine his techniques and found that he had a lot to contribute to improving his skills. The article can be read here.
It seems sacrilegious to the surgical estab;lishment that we could have somebody looking over our shoulders as we operate who would then tell experienced surgeons what he did wrong, but there is no denying that the idea that needs dispassionate discussion and perhaps implementation. This could perhaps overcome the 20 year decline that the authors of the first study have demonstrated!