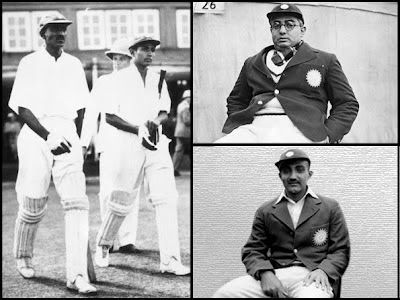 This picture is of Vizzy ( Upper right), Amarnath ( lower right) and Amarnath and probably Merchant coming in to bat.

Indian cricket has been no stranger to controversies. In our time we can remember Kapil Dev being dropped from the Calcutta test during the England tour in 1984 allegedly at Gavaskar’s behest, Mohibder Amarnat referring to the selectors as a bunch of jokers and of course the Saurav Ganguly /Greg Chappel imbroglio.
However many of us do not know that Indian cricket was mired in controversies frrom its earliest days. One of the earliest omne took place in 1935 duringthe Inidian team’s secondl trip to England. Lala Amarnath or plain Nanik Amarnath as he was known then was sent back in disgrace from the tour even before the first Test was played.
Let us set the background. Those were the days of the Raj. Intimations of mortality were evident, but most of the principal beneficieries of Empire were unaware of the fact. The Princes were still the bantam cocks, dancing attendance to their Imperial masters, and the officlas of the Raj still behaved as if they would be ruling Inida for millenia to come. 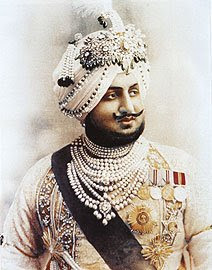 The Maharaja of Patiala, Bhupinder Singh was the ruling diety of Indian cricket. He lavishly patronised the game, spending money like water to build a team, organise tours and even built a cricket ground in Chail, in the then Punjab Hills in order that he may enjoy the game during his summer visits to Simla. Lala Amarnath was employed by him nominally in the Patiala Army, but actually to play cricket for greater g lory of the maharaja.
In October 1931, disaster struck, for Patiala that is. Lord Irwin, the scholarly Viceroy was repaced by Lord Willingdon. Lord Willingdon was kenly interested in the game and began to interfere in the affairs of the Board. This was the time when the second England tour was being planned. It was usual in those days that Maharajas who sponsored the trips insisted on and were appointed as Captains of the teams. Bhupinder Singh himself had been made Captain of the 1932 tour of England because of his offer pay to pay most of the expenses. It was another matter that he could not go because of personal reasons.
A similar situation arose in 1935. The zamindar of an estate near Benaras, Vizianagram, offered to pay some of the expenses, implicit in this offer was the expectation that he would captain the side. Vizzy, as he was popularly known too had backed out of the previous tour when he got only the sub deputy captaincy, whatever that was.
Patiala was incensed. He immedetely made an offer that could not be refused. He offered to pay not only all the expenses of the tour, but also of a pretour training camp at Patiala. Vizzy, not having the resources of one of the biggest native states in India could hardly compete. But he was a consumnate politician. He immedeately began to ingratiate himself with the Viceroy. He organised a tournament in Delhi to clebrate the Silver Jubilee of the King Emperor and as an icing on the cake, presented the city of Delhi with the Willindon Pavilion. This did the trick: much manipulation later, and despite Patiala’s ferocious objections, Vizzy was captain.
But becoming captain was one thing, delivering on the field was a different kettle of fish. His ridiculous field settings and foolish bowling changes made the Indian team’s life miserable in the preliminary matches. He was so obsessed by his apperance that he changed after every session of play, emerging as J B Fry sneeringly oserved, as cool as the Himalayan snows! On top of that he and the manager, Major Britton Jones was in cahoots in order to prevent any erosion to his authority. The team was, by now split into several groups. Vizzy was at the centre of the divisions, even asking according to one account, asking players of his group to purposely run out players of the opposing group! The story goes that once, when the great Vijay Merchant was batting with a member of the opposite camp at the popping crease, he was unwilling to risk taking singles for fear of being run out!
The press, both in England and in India began to become increasingly critical of Vizianagaram. This added to the pressure on of the skipper and he began to hit out indiscriminatly. One convenient target was Amarnath. He was, in any case, as an employee of Pataila, suspect; on top of this he had a Punjabi temper which he seldom bothered to conceal. Many minor and major tiffs took place. It will be tedious to recall of them. But the final straw that broke the camel’s back was an incident that took place during the match against the Minor Counties.
Amarnath was nursing a bad back. He neede rest, but Vizzy asked him to pad up to be ready to go in. However as wicket after wicket fell, he sent one person after another in, but kept Amarnath waiting, not even allowing him to rest his back. At the end of the day’s play, Amarnath made some comments to the effect that “he knew what was happening”. Possibly he used some colourful Punjabi language as well.
Vizzy used this incident to get several players to write a petition against having Amarnath in the team, and he and Jones decided that as a disciplinary measure, Amarnath was to return home. He was asked to pack and put on the next ship back.
The decision created a huge sensation. Amarnath was one of India’s best batsmen and one of the pillars of the team. He had scored a century on his debut in the last home series against England. The huge hullalloo that resulted meant that all the facts came out. Vizzy and Jones were on the backfoot. But Vizzy’s background manipulations continued to have its effects on British officaldom. He was knighted for his services to the Crown in the middle of the test series.
This however did not save him from the indignation of the home public. A demand went up for an enqury. There was more drama as there was a demand to send Amarnath back to England by air and he actually sent his heavy luggage on, before he was asked not to go by the Board secretary. But the controversy showed no signs of dying down and the Board had to set up an enqury committee whose members were The Chief Justice of the Bombay High Court, Sir John Beaumont and Dr P Subbrayan, President of the Madras Cricket Association and Sir Sikandar Hyat Khan, former Board Pesident and the then acting Governor of Punjab.
While the Indian members were unable to continue becauuse of other commitments, Beaumont interviewed all the members of team and finally came out with a report that exonerated Amarnath and said some nasty things about the Board well as Vizzy. Amarbanth was free to continue his career, though controversy dogged him throughout his playing days and even after.