September 12, 2012
Reproducing an article written By P C Sengupta and published in 1970 : Med Hist. 1970 April; 14(2): 183–191.
The original article is not easily avialble now. I think this very well researched article will be a welcome addition to the series on the Calcutta Medical College in this blog. I will be breaking it up inot a number of instalments. Please also check out here, here, here ,here and here. 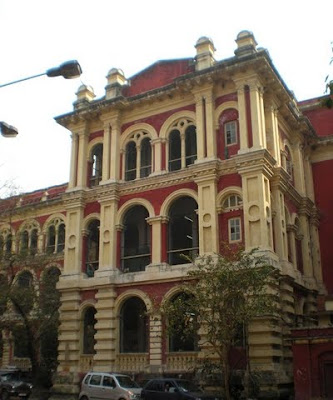 AN EDITORiAL note on the Progress of Science appeared in the Medical Times and
Gazette, London, in 1852; this reads as follows: 'It is with sincere gratification that
we today place before our readers an ably-written communication of considerable interest, by a native of our Indian empire. Dr. Chuckerbutty is, we believe, the irst native of that clime who has contributed to the progress of the science of medicine; and his friends-and he left many in this country-will rejoice that the high pronmise that he held o t when a student here bids fair to be well fulfilled. The communication in question1 was on a singular case of epilepsy admitted under the care of the author Dr. Soorjo Coomar Goodeve Chuckerbutty into the Medical College Hospital, Calcutta, ofwhich he was the Assistant Physician at the time.
During the next two decades S. C. G. Chuckerbutty rose to be a prominent figure in Calcutta but today, little is known about him and his scientific contributions. Soorjo Coomar Chuckerbutty, son of Radhamadhab Chuckerbutty, a pleader at Dacca, was born in 18262 (? 1824w, ? 18274) at Kanaksar, a village in Dacca district. He lost his parents at the age of six years and was then obliged to make his own way in the world. He studied initially at the village pathshala (school), where he learnt the three Rs in his mother tongue Bengali and elementary Sanskrit and Persian. 'He was 13 before he heard English, but at that time the visit of an official excited his attention. He determined to make himself master of the language. With a few clothes and a little parched rice for food, he set off on a journey of sixty miles to the nearest English school." This was at Comilla where he stayed along with several other
students at the house of a well-to-do Indian gentleman, Shri Golok Nath Sen who was an official at the district court there. As was usual at the time, Chuckerbutty and other students had to cook their food in turns.5*
Subsequently he came to Calcutta and was a student of the Hare School. In 1843, he tried unsuccessfully to get admitted into the Medical College of Bengal with the help of a Bengal civilian Mr. Alexander, who offered to bear his expenses as a student of the College. Next year, however, he succeeded, probably on the recommendation of Professor Henry Goodeve of the College. He proved to be a hard-working and bright student of the Medical College.
In 1845 he was selected to go to England for further studies. Dr. M. J. Bramley, the first Principal of the Medical College of Bengal (established in 1835) had felt that some of its bright students should be sent to England to complete their education. (In this he had followed the example of M. Klot Bey who had earlier taken a few Egyptian students to Paris for similar purpose). Following Dr. Bramley's untimely death, Professor H. Goodeve put forward this project for consideration by the local authorities of the East India Company and offered to accompany the students to England, arrange for their stay and education there and bear the expenses for one student. The project ultimately materialized when Shri Dwaraka Nath Tagore offered to bear all expenses for the education of two students and adequate public donations were raised for the cost of educating the fourth student. Dr. Goodeve was granted the necessary facilities and he, along with the four students, Bhola Nath Bose, Dwarka Nath Bose, Gopal Chunder Seal and Soorjo Coomar Chuckerbutty, who had been selected, left for England on 18 March 1845 on the barque Bentinck. Shri Dwaraka Nath Tagore also went to England by the same boat. 6.7

In London, the four students resided with Professor Goodeve7 and were admitted into University College. B. N. Bose, D. N. Bose, and G. C. Seal became members of the Royal College of Surgeons (M.R.C.S.) on 27 July 1846 and S. C. Chuckerbutty on 12 May 1848,8.9 when he reached the admissible age.7 The Lancet (20 May 1848) commenting on Chuckerbutty's success mentioned about his zeal and attention to studies, that endeared him to his professors, particularly to Dr. Grant, the professor of comparative anatomy, who provided him with valuable opportunities for learning and took him to Europe during his own tours of the Continent. As for success in the examination, the Lancet wrote 'in justice to the gentleman, it should be stated that he passed a severe examination before the Court on Friday evening'. Chuckerbutty passed the first examination for M.B.(Lond.) in the first division in 184710 and the second and final examination in the second division in 1849.11 He passed the M.D. examination in the first division standing second in order of merit in the sameyear.11'12
During the years of his study at University College, he was awarded the gold medal for comparative anatomy and many certificates of merit.7' 2 Chuckerbutty had discarded the 'sacred thread', the symbol of his Brahmanic caste,on his admission to the Medical College, Bengal.4 In 1848, he decided to embrace Christianity. The Lancet (14 October 1848) recorded this and mentioned that Dr. Goodeve reported to the Medical College authorities in Calcutta that this change of religious opinion was purely spontaneous. Dr. Chuckerbutty adopted the name Soorjo Coomar Goodeve Chuckerbutty.
Dr. Goodeve Chuckerbutty returned to India after obtaining the highest medical qualifications from the University of London. His patrons in England including Sir Edward Ryan who had been President of the General Council of Education while in Calcutta, recommended Dr. Chuckerbutty's appointment to the Covenanted Service and a professorship at the Medical College, Calcutta.7 This was not agreed to by the authorities and he was admitted to the Uncovenanted medical service and appointed the Assistant Physician to the Medical College Hospital (10 May 1850).
He continued to perform his duties in this capacity till 1854 when he was appointed
the officiating Professor of Materia Medica and Clinical Medicine and Second Physician to the Hospital. During this year, the authorities of the East India Company.
in London threw open to public competition the appointments to the Covenanted Medical Service. Chuckerbutty's 'ambition had always been to become a member of the Covenanted Service of the East India Company, and thus remove from his race, the stigma of a proscription which denied them a career of honourable ambition in their own land'.4 As soon as he learnt about this decision of the East India Company authorities, he gave up all the advantages he enjoyed at Calcutta and at greatexpense and contrary to advice, set out for England. 'If I fail' he wrote, 'it will be a satisfaction to me that I have used my best efforts to the service of my country and that it is only physical difficulties thrown in our way by the Legislature which have been the cause of my disappointment."4
(All references at end of article) To be Continued.