The Death of Lal Bahadur Shashtri 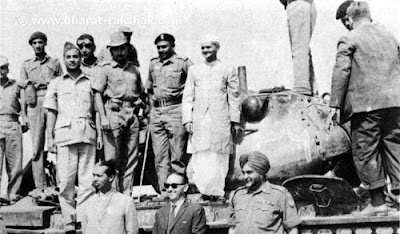 Except for those of us who grew up in the sixties and seventies, Lal Bahadur Shashtri was a figure whom we knew little about. He was the little man with iron in his constitution, the man who succeeded Jawaharlal Nehru, honest to the core, the man who won the 1965 War with Pakistan. He was a man who seldom thrust himself to the stage; most of his work was from the shadows. But his death was anything but quiet. He thrust himself into attention in a way that has now been forgotten, but bears recalling.
It was the night of 10/11 January, 1966. The place, the capital of the Uzbek SSR, Tashkent. The previous day had been a hectic one, but one that ended in triumph for this quiet, but steely statesman. President Ayub Khan of Pakistan and he had agreed to the terms which would end the War of 1965 and return conquered territory to their rightful owners. Pakistan’s bid to tie this to the future of Kashmir had been foiled and Prime Minister Kosygin of the then USSR had acted as the honest broker who had finally managed to bring the two adversaries together. To celebrate the occasion, Kosygin had organized a reception at 7.30 PM. Shashtri attended the reception and took his leave at about 9.45 PM shaking hands with Ayub Khan. A bystander heard them say Khuda hafiz to each other. Ayub Khan said “ Khuda Accha hi karega” ( God will do only good ). I speculate, but I am sure that Kosygin and Ayub were glad to see this strict teetotaler and vegetarian leave so that they could enjoy a drink without his censorious presence.
He returned to his villa at about 10 15PM; on the way, crowds cheered him calling out his name as the car passed by. After returning to the villa in which he was staying, Shashtri chatted with his colleagues and then even went out to see off his Private Secretary who was going to attend a Press Conference. He then had a light meal, a slice of bread, some sag and fruits. At this time he also got some calls from India which he attended. One of the calls disturbed him as he was informed that Atal Behari Vajpayee, then a young opposition leader, had criticized the terms on which the peace treaty had been signed. He then allowed some Indian newsmen to take photographs of him outside his bedroom.
At 11.30 he retired to his room and had a last glass of milk, which was his usual practice. His personal staffs, including his personal doctor, R N Chugh were in an adjoining room where they supervised the packing of their luggage and Chugh went to bed while the others were still busy with their tasks.
At 1,20 PM , Shashtri appeared at the door of the room, and asked for the doctor. Sahai, one of his personal staff immediately called him, while the others helped him back to his bed, though even then he did not complain, but walked steadily to his bed. On the way to his bedroom he began to cough incessantly and aksed for some water which he could now only point to as he was unable to talk for coughing .
However by time Dr Chugh arrived, running from his room, The Prime Minister was by then in severe pain and unable to breathe. Between fits of coughing, he kept calling out “ arey Baap, Arey Ram” ( My Father, O, Lord Ram ) . Chugh administered an injection and then realising that he had gone into arrest, started resuscitation efforts. As he realized that his efforts were bearing no fruit, he became increasingly helpless and began to express his despair incoherently. By this time, Russian doctors had arrived and they now took over the task from Dr Chugh. However it was apparent that he was gone and the time of death was recorded as 1.32 Am on the 11th January 1966.
The news had by now spread. The Indian delegation members began to arrive: Sardar Swaran Singh and Y B Chavan among them. Kosygin arrived almost immediately after: his face was, according to an eyewitness ashen and grief stricken. General Ayub Khan too came immediately and was also obviously stunned at the turn of events.
Kuldip Nayar has recorded an interesting story.Apparently, Aziz Ahmad, Pakistan’s foreign secretary, rang up Bhutto to inform him about Shastri’s death. Bhutto was half asleep and heard only the word “died”, and apparently asked, “Which of the two bastards?” Like all Kuldip Nayar’s stories,
Ths has to be taken with perhaps two pinches of salt. 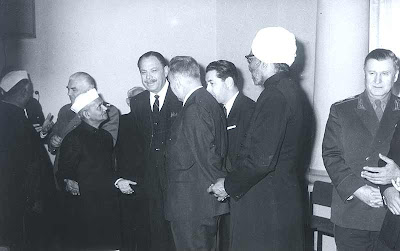 The next day, in the words of Tennyson, “Home they brought her warrior dead”. His bier was driven through the streets of Tashkent to the airport with a million people lining the streets to bid him a silent farewell and Kosygin, Ayub Khan, Gromyko and Malinovsky were all at hand to act a Pall bearers to a short man who stood much taller than many others who were more than six feet tall.
I remember that morning. I must have been all of 8 years old. I remember that the radio had been switched on as usual to catch the 6 AM English news. Nobody was paying much attention when suddenly someone noticed that they were saying something about “His body will be brought back at… “ . We were all expecting Shashtri back, but “Body”! It was then that we realized that a tragedy had taken place and we had lost our second Prime Minister in less than two years.
Shashtri was cremated on the 12th January at Shanti Van which remains to this day a pilgrimage for any thoughtful Indian. A decent man had gone. The Indira era was about to begin.

This account is based on C P Srivastava's biography of Shashtri.

Anonymous said…
Facebook:
Ravi Adlakha: a very good and honest write up, indeed. I too remember the day and even the newspapers, which used to hit the streets of Calcutta at 6 AM were delayed by over an hour due to this breaking news
24 September at 15:06 · Like
Debasis Biswas: Another fabulous write up! This was probably one of the two biggest body blows to our country in the form of premature deaths, the other being the mysterious accident of Homi Bhabha.
24 September at 18:11 · Like
Indrajit Sardar: This was also a mystery--natual death or murder? Apparently there were mysterious bruises and other marks on his neck and all features pointed to poisoning. It was a strange coincidence that some of the witnesses also met with unnatural deaths.
25 September at 00:50 · Like
Kaniska Sarkar: Thanks anjan to remind us about LAL BAHADUR SHASTRI, JAI JAWAN JAY KISHAN , INDIAN NATION REMEMBERS THE SLOGAN ,COINED BY SHASTIJI WHO UPHELD THE HONOR & DIGNITY OF THE IDEA & PHILOSOPHY THAT UNITES INDIA. ONLY ANOTHER SLOGAN THAT HAS THE SAME EFFECT WAS COINED BY NETAJI , JAI HIND.
25 September at 04:04 · Like
Write a comment...
October 17, 2012 at 5:35 PM