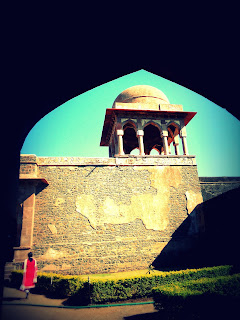 Malwa is an ancient part of India and plays an important part in its history. The name is associated with many romantic names that echo down the roads of Indian history and legend. It is here that Ashoka first won his spurs as a youthful governor of Ujjain. Bidisha, beloved to all readers of Jibananda was here. Kalidas wrote his famous plays in this very soil and the legend of Baz Bahadur and Rupmati, the stuff of so many romantic poems was also played out here. The Narmada flows through it as does the Chambal and the Betwa, and people have been coming here for pilgrimages since the dawn of civilization.
Mandu occupies a rocky outcrop of the Malwa plateau. Known to have been a fortress since before the birth of Christ, it really came into prominence during the rule of the Parmars, who ruled over the area in the 10th and 11th centuries. Their descendents still live in the area and are major landholders in the Indore region today. The principal ruler of this clan was the legendary Raja Bhoj who ruled Malwa from the early 11th century, dying in 1055. A philosopher king, he has left extensive writings on poetry, architecture, chemistry, the Hindu legal system and a host of other subjects. A great builder, he also founded the city of Bhopal and built innumerable temples and secular buildings. He was also instrumental in repulsing the attacks of Mahamud Ghazni when he invaded India. 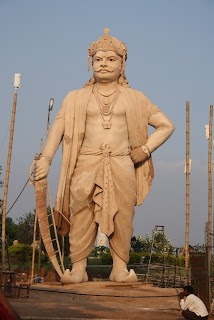 While he ruled from Dhar, he also built a fortress in the high reaches of Mandu. When the Parmars were replaced as rulers of Malwa by the Muslim Sultanate, the fortress also changed hands, later coming under the sway of the Ghuri dynasty of Afghan adventurers who quietly bid for independence when the Mughals took over the throne of Delhi.
The Ghuris ruled form Mandu, making it the capital of the Malwa region. The entire plateau on which Mandu was situated was ringed with high walls converting it into the world’s largest fort city about 45 square kilometers in area. And in this area, they built monuments many of which still remain to remind us of their glory. 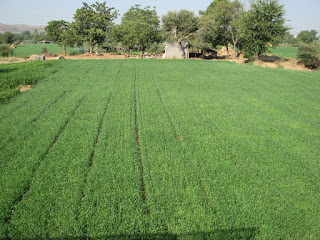 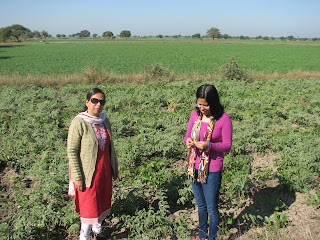 The drive to Mandu from Indore takes a short time, something like 2 and a half hours. The road is lovely, green fields now pregnant with wheat on both sides, until we climb a slope and then drive through a gate to enter the fabled city. There is a so called Dinosaur Centre housing dinosaur eggs and other fossil remnants which have been found in this area. Built with good intentions, familiar Indian apathy has set in and most of the attraction is now basically nonfunctional. There are some exhibits which somebody had curated with care sometime in the past. Today, most of the signage is gone; the glass covers of many exhibits broken. They have the gall to charge an entrance fee!
As we enter the walls of Mandu, ruins can be seen everywhere. If you have a vivid imagination you can easily populate these ruined buildings with medieval men and women, traders, soldiers, dancing girls and servants. There must be many tales to tell but the stones are now mute. Many of them are engulfed by greenery but many have been restored to give us a glimpse of what they may have been in their heyday. 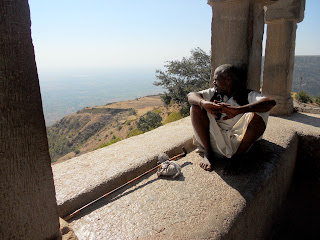 Mandu is now a village. There are fields, water bodies and small bustees where people live the life of rural India as they have done for millennia. One of the most endearing features is baobab trees, imported from Africa. I have last seen them in Kenya, but here they have grown as tall and majestic as in their native land and seem to be as at home as the peepul or the banyan tree. Their fruits are on sale; misnamed Imli (Tamarind), it tastes horrible. 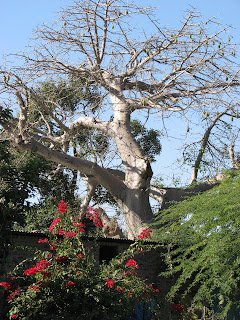 The story of Mandu is the story of Baz Bahadur and his great love Rupmati . Baz Bahadur was the last independent ruler of Mandu, before it went into the hands of the Mughals on a permanent basis. The story goes that when out on a hunting trip, he was captivated by a shepherdess who was bathing in the Narmada and persuaded her to become his wife. Rupmati agreed on condition that she should be able to see her beloved Narmada every day. Baz Bahadur agreed and built the Rupmati pavilion for her. The idyllic love story did not last long, Baz Bahadur was defeated by the imperial Mughal army of Akbar and fled to Rajputana and Rupmati, as the story goes, poisoned herself so that she did not fall into the hands of the imperial forces. Ironically, several vicissitudes later, Baz Bahadur compromised with Akbar and joined the Mughals as a servitor. 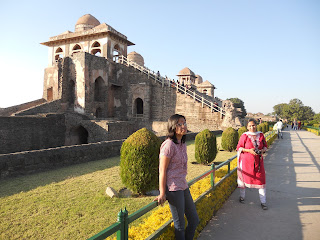 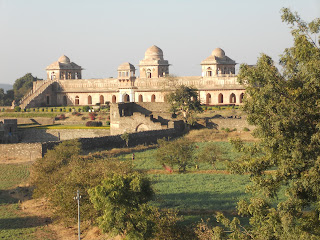 We made the usual rounds: the Rupmati palace where, according to legend, Rupmati came to pray to Goddess Narmada before returning to the main palace. I remembered this place well from my previous visit. The Pavilion where she used to sit is an airy eyrie from where the Narmada can be seen. Today, the winter haze prevented us from doing so; the last time I had come in the post monsoon time and the silver river had been clearly visible.
The Jahaz Mahal was also as magnificent as I remembered it. In fact, I think that the Archeological Department has restored it further, recreating its magnificence. It is easy to imagine the lords of Middle India cavorting on its airy pavilions while the strains of music floated over the lakes which surround it. 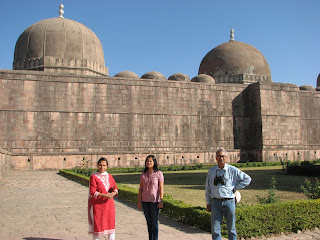 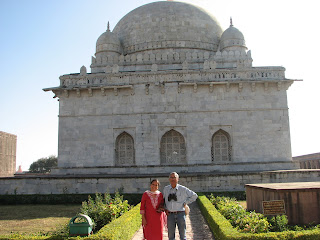 The Jami Mosque, it is said was built to resemble the mosque in Damascus. There is much restoration work going on, but it is easy to understand how it was a wonder in its time. There are many Hindu motifs which suggest the cannibalization of Hindu religious structures. Next door, so to speak, was the tomb of Hosang Shah. He is not buried here, but the tomb he built remains as the first marble structure in India. It is easy to see in its rough hewn stones, the craftsmanship which would later build the Taj.
Next morning we went for a walk. Purposely avoiding the main monuments we walked along a village trail that led unexpectedly to an open air museum which houses many sculptures and parts of temples, collected from other monuments which have been decoyed over the ages. We followed a dirt track to a water body, a typical North Indian shallow lake, and full, at this time of the day of birds. There were teals, kingfishers, lapwings and many other usual inhabitants of an Indian lake. We suddenly noticed what we initially thought was a dog walking along a bund opposite, on closer inspection through our field glasses; it turned out to be a jackal returning late to its lair. 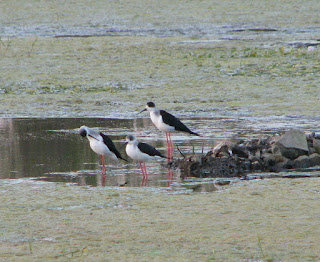 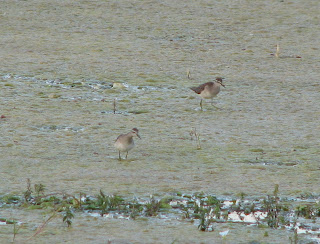 We sat here for a couple of hours as the birds fished and pecked, large numbers of blossom headed parakeets flew screeching to meals in nearby fields. The morning was well spent and we returned for breakfast with gargantuan appetites.
Later that day we walked to one of the gates that pierce the walls of Mandu. The wall in this portion was relatively intact and it was easy to imagine the soldiers keeping watch from its height over the low lying countryside. One can conjure up mentally a column of merchants weary after a long journey coming to the gate, challenged by the gatekeepers and then allowed entry to the city of their dreams. Mandu is city of the imagination. It is possible to populate the now scarred stones with people who lived in this great city of medieval India. I found no difficulty in imagining large houses and measly hovels, kings and their retainers, and ordinary people all living a life which is now gone forever. The jungle has claimed parts of it, bucolic villages have sprung up where city streets once were and the lessons of history are again reinforced: permanency is a chimera: what are grand palaces today may be overgrown ruins tomorrow. But the idea remains, of a grand city overtaken by events. Who is to say that our present great cities will not suffer the same fate? 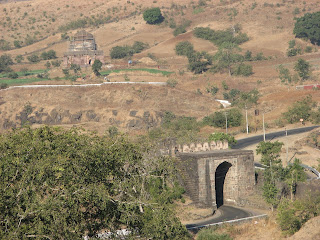