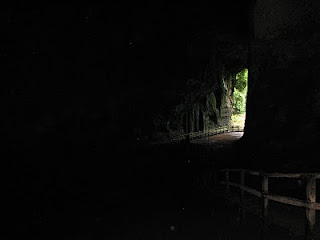 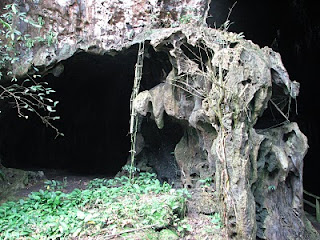 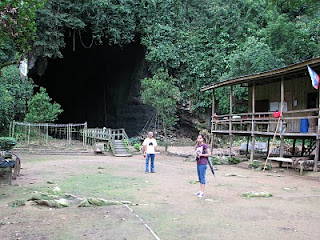 Sandakan really hides herself in the forests. The forests of Borneo have always been a botanist’s and zoologist’s delight and there are many famous names associated with Borneo and its forests. These include Wallace who anticipated many of Darwin’s theories as well as Marianne North, the famous nature illustrator. Incidentally Marianne is a very interesting woman whose collection we were privileged to see at the Kew Gardens in London. In fact she has recorded that during her visit to the hills of Sikkim, she passed through Siliguri in 1878. ( She did not have much to say about it!)
Be that as it may, the present day reality is that palm oil plantations are destroying the Borneo forests at a crazy rate. This was evident as we drove out of Sandakan towards the Gomantong caves. There are patches of rain forest left forlornly in between long stretches of palm oil plantations, looking for all the world like a child at a new school, sticking out of its surroundings .
However as we came closer to the caves, the rainforest was more visible, the forest here has been preserved by the Sabah Forest Department. As we turned off the highway we quickly entered primeval forest, the trees reaching hundreds of feet into the now almost invisible sky. After paying the necessary admission fees we began to walk to the caves over a very convenient walkway lifted above the ground. The rain forest has a different feel about it. It is gloomy, dark and dank, but occasionally there is a flash of colour: some red leaves, a bright yellow flower and suddenly a brightly coloured kingfisher startles us.
The Caves have been used by swifts for aeons. The locals have also been harvesting their nests for at least 1500 years. There are Chinese records of swift nests from these caves being transported to the Middle Kingdom for the delectation of emperors. Today the Forest Department issues permits to enter the caves for this purpose twice a year. There is a small settlement at the entrance to the caves, I am not quite sure whether these are forest department shelters . The caves are divided not two systems of caves one of which contain the black swifts’ nests and the other which contain the more prized white nests. Incidentally, the nests are constructed by the birds using their saliva, so good luck to those who want to try them. Despite my Bengali omnivorous disposition, I would feel a little leery of trying it out. But the Chinese have been having it and still do. There must know something that has escaped me!
We entered only the first system of caves. Here too, there is a broadwalk that enables us to explore fairly easily though it is eerily dark inside. There is a constant sound of humming, perhaps by swifts moving in and out. We can see an opening in the roof of the cave, a little filtered light streams in. The floors are full of guano (birdshit for the uninitiated) and there are huge numbers of Insects that have made their home here. There are other caves leading off from this one, one has to climb over a stony moraine to reach it. In fact, as I said there are a number of caves forming an entire system of caves which would be very interesting to speleologists. The caves are also home to a large number of bats which were in residence when we went in. In the evenings there is a spectacular spectacle when the bats stream out and the swifts come home. I have seen it once in a National Geographic documentary. Today, we have to leave a lot earlier. We were now bound for the Kingbatangan River.