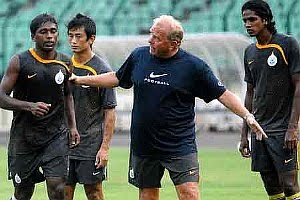 If you have the press on your side, you can do anything in India. And there are some personalities who are experts in manipulating the press as well as the online media. One such person is Baichung Bhutia and not too far behind is his mentor Bob Houghton.
India was the worst team in the Asia Cup. Ok, it was a feat to have got there, but they qualified three years ago. Subsequent to this, the coach threw tantrums, made racial comments at referees, criticized the Federation, got an increase in salary which was totally uncalled for, and managed to spend most of the time abroad with his team or without.
Baichung Bhutia was injured most of this time. When his club (then Mohun Bagan) began to ask why he could not play football while fully able to execute intricate dance maneuvers for a TV show, he managed to project it as a “poor player being targeted by heartless clubs”, broke his contract and landed with East Bengal, for whom he has not played a match for quite some time now. Just in case they kick him out, he has started making noises about how he would like to retire from this club. This will probably enthuse the club to carry him at a high salary for the next 2-3 years until he decides that even Calcutta clubs’ gullibility can no longer be exploited and decide to retire, or perhaps play a few more years for the United Sikkim club that he is setting up.
I pity the officials of the Calcutta clubs, both of Mohun Bagan and East Bengal. The same players who made their name playing for these clubs , nowadays make their fame by criticizing the practices of these clubs: they are out of date, do not have gyms, their management is behind the times etc etc etc. The cry is out: Calcutta football is in decline, the future is in Goa and Mumbai.
If we look at cold statistics, there is something in this claim, the Indian Football League has not come to Calcutta for quite a few years. However if we look at the other Blue Ribands of Indian Football, we find that Calcutta clubs have won the Federation cup continuously for the past 6 years, and the Super Cup thrice in the same period. Thus the rumors of their demise are perhaps a trifle exaggerated. On the contrary, Mahindra United, died last year, and whenever one person at the helm loses interest, one or all the Goan clubs may meet the same fate.
Coming back to the Indian team. The players told us that we have the best coach the world has ever seen, much better than the Naeemuddins and Sukhwinder Singhs that we had to tolerate earlier. The coach told us that he had a well knit team that would do wonders. Unfortunately all we did was to concede 13 goals in three matches and score three, two of these from penalties. Now we are sold the story that they fought like tigers, not like the Habibs and the Kishanu Deys of yore who went down like lambs. This ignores the tennis like scores that all teams, without fail, notched up against us over the past few months.
I think it is high time that these two idiots, Baichung and Houghton were shown the door. They can be asked to earn their living instead of living on a sinecure. Baichung can perhaps fool his native Sikkimese for some more time, but will find it difficult to earn the sort of bucks he has become used to. As for the last of the buccaneers of the East India Company, Houghton , he should retire to his native Hampshire, or Lancashire or whatever shire he comes from and live happily ever after in the same way that his forbears did in the 18th and 19th centuries with their spoils from India.
As for us benighted football fans, we keep hoping for the best. Perhaps the age group teams, coached by Indians will do the trick, perhaps the clubs will reform themselves and perhaps the professional league will become truly professional. Perhaps India will play in the world cup in our lifetime. If not, the Mohun Bagan East Bengal clash looms, lets cheer for our teams and celebrate (or mourn) the result! That is all we were fated to do.

Anonymous said…
Exactly. This very succinctly and trenchantly expresses all my feelings. congratulations!!
January 26, 2011 at 3:17 PM

Anonymous said…
Third Idiot is some NRI writer of this blog. His every word smack of negativity about Indian football,there is no dearth of fault finders like him in this part of sub-continent.To improve Indian soccer we all must look for some collective wisdom,Instead of criticism.
February 1, 2011 at 10:30 PM

Anonymous said…
Third Idiot is some NRI writer of this blog. His every word smack of negativity about Indian football,there is no dearth of fault finders like him in this part of sub-continent.To improve Indian soccer we all must look for some collective wisdom,Instead of criticism.
February 1, 2011 at 10:33 PM

Zeon said…
Hi ,
I just wanted to invite you to the indiblogger meet happening in Kolkata after 2 years at
CII
DC-36, Sector - 1, Salt Lake City
Kolkata - 700 064
Landmark: Behind City Centre.
Only 200 seats available. Entry is free with loads of fun. If you have not registered already, register here = http://www.indiblogger.in/bloggermeet.php?id=113 . See you there!
February 13, 2011 at 6:32 PM