The Spectacle of the Industrial Revolution 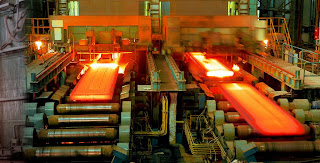 I have blogged about it before, but I want to say it again, the BBC Radio 3 programmes are perhaps the best in the world. And one of my favourites among them is the In our Time series in which the host, Mervyn Bragg,speaks to various experts on subjects that vary from Daoism to Byron’s Childe Harold to take two recent examples. It is obviously impossible to keep up with the actual broadcasts, but now we have the podcasts which allow me to hear his programmes over the weekend, at my leisure and in comfort.
He recently hosted a show based on the Industrial revolution which changed the face of the world forever. As one of the experts pointed out during the course of the programme, before the industrial revolution, life could be unchanging for centuries, but after this, we are all aware, that life may improve or conditions may worsen, but things are definitely going to change. When I think about the communications revolution that has taken place over the past decade or two, with the rise of the internet for everything like sending messaging, talking, seeking and disseminating information and so on, I realize the complete truth of this statement.
One thing that came up during the discussion was the fact that the Industrial Revolution changed the landscape of England and every country where it occurred, usually for the worse. The countryside was obliterated as factories and cities came up and the process also polluted rivers and lakes and the air. However the Industrial Revolution also spawned a tourism industry that catered to people who wanted to see these factories and were interested in the production process as a spectacle. The sight of huge machines, their phenomenal capacity do work that scores of men did in the past , the seemingly magical ability of steam to drive these machines all made them the wonder of the Industrial age and this ,as I said, attracted streams of tourists.
This reminded me of how we used to be fascinated by the Steel factories that changed the industrial face of India in the sixties. When we were schoolboys, these steel plants, in Durgapur, Tatanagar, Roulkela, Bhilai and others fascinated us and grasped our imagination in the same way that the internet perhaps captures the imagination of youngsters today. Whenever one travelled along the South Eastern Railway line to Bombay, I remember staying awake to be able to see an eerie red glow at the horizon at Roulkela ( where the Bombay Mail used to reach at around 2 AM) , We used to watch in fascination as this was rumoured to be from the blast furnace in the then newly built steel factory there.
Bhilai was a new township built entirely around the steel plant there. My uncle used to work there and one of the treats of visiting Bhilai was a visit to the Steel Plant. It was not easy, My uncle had to wangle passes for us and then we used to go there all agog with anticipation. There was quite a rigorous security checking at the entrance and then we could enter the plant. The sight of steel pouring down from gigantic receptacles and then being shaped into bars and myriad other shapes is still green in my memory. When I came back to Calcutta I used to boast about this for ages to all my schoolmates who had never seen this wondrous sight. I am sure that such spectacles must have motivated many to become engineers.
I can completely relate to the visitors of the nineteenth century who came to see the Industrial Revolution in action. I used to do it myself. Now that we are so blasé about these things, I look back in wonder at the time when we used to find factories worthy of our wonder, and rightly so, because they led the way to progress. Nehru was not wrong when he labeled them as the “Temples of Modern India”. I salute those men who made these factories possible and changed life for the better for all of us living today.
Industrial Revolution tourism