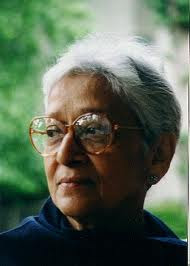 2011 has started badly for all Bengalis and lovers of Bengali culture. Yesterday, Suchitra Mitra, one of the greatest exponents of Rabindrasangeet passed away. It was not entirely unexpected as she was 86 years old. Apparently she suffered a cardiac arrest while having her lunch and died at home before any medical help could be summoned.
The present status of Rabindrasangeet as the undisputed top of the pops in Bengal often conceals the fact that this was not always so. One of the group of singers who brought Tagore’s songs to every Bengali household and made them a part of Bengali existence was Suchitra Mitra. She was educated in Santiniketan, but she made Calcutta her karmabhoomi and her school Rabitirtha was one of the important centres for the propagation and popularization of Rabindrasangeet.
She was beautiful, extraordinarily so, and had an imperious bearing; in later years the shock of silver hair which crowned her added to the distinguished look for which she was famous. We were fortunate that we grew up in the Calcutta of the seventies when she was at the peak of her powers. I have heard her at Rabindra Sadan, at various concerts all over Calcutta, but I first saw her from close quarters when she used to come to sing at the Socials of the Medical College. I am told that she sang at the Medical College functions for decades, but I can speak only of what I saw in the late seventies.
I have never heard a voice like hers. She could impart to Tagore’s words a force and a feeling that some others could, and again, many others cannot. When she sang, the notoriously undisciplined medical students fell silent and nobody stirred as she enchanted us with music that was verily divine. I always used to wait for her rendering of “Krishankali ami tarei boli.” It was her tour de force. I still get goose pimples as I recall the pause after the word Kalo? And when she resumed, it was as if we could see the pastoral scene with the dusky protagonist in the background. She represented all that is best in Bengali culture and was the quintessential bhadramahila.
I spent last evening listening to whatever songs of hers I have in my laptop. It is inevitable, I suppose, that she would go after a long and productive life. But even so, my heart is heavy as we say goodbye to one more icon of my childhood, adolescence and adult life. May she be reborn with the same voice to give pleasure to many more!
( I have borrowed the image from one put up by Parabaas in an interview with her)
bengal Culture Tagore.