The May revolution and Mamata's report card. 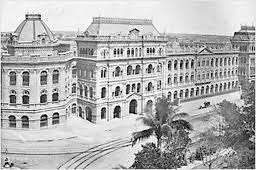 ( An old picture of Writers' Buildings.)

Now that the Madam (of Bengal) has completed about 4 and a half months on the job, it is possible and fair to evaluate her doings and prepare a tentative report card. While it is manifestly unfair that we compare her work for such a short time with the activities of our commie friends over three and a half decades, it is not more that she had let us to expect when she promised to change the face of West Bengal in days.

What has she accomplished?

The first thing that she has accomplished is, that by simply sitting in the CM’s chair she has showed those of us (including, I am not ashamed to admit, myself) who had thought that the CPM could never be shifted from Writers’ Buildings that we were wrong. With implacable courage, unshakeable determination and an iron will, she showed us, and I quote “Impossible is nothing”. And how! If the verdict was less than the total rout that we witnessed in the May revolution, I am sure that the Opposition would be up to all sorts of tricks, including disruption of normal life and unnecessary strikes and protests over trivial matters to make life hell for the administration as well as for everybody in Bengal. As it happens they are still lying low, all their dadas are still wondering what hit them and creating chaos is not exactly in ether minds as they can expect a zero response from the public if they try anything.

A second thing that she has done is that she has, if not solved, at least contained the Gorkhaland agitation. The previous dispensation appeared to be content to let things slide, perhaps hoping for a Bengali backlash which might fetch electoral dividends. This evil policy had been successful in the past, when Ghising’s agitation led to a campaign to “save Bengal from a second partition” and then as soon as the elections were won, Ghising became the favoured friend of the CPM until the poor man was unseated unceremoniously a couple of years ago. And who know that a singing contest would lead to such momentous consequences. Certainly not Subhas Ghising!

A third thing that she has done is that she has , at least until now, controlled her tongue and not spoken in haste to repent at leisure, which was an enduring feature of their political style earlier. Most of her pronouncements have been surprisingly sensible and she has reined in some of the less cerebral members of her flock.

One thing that she has not been able to do is to bring back the rule of law. Even at the height of Left Rule there was no law in West Bengal. There was an order of sorts imposed by the mandarins of Alimuddin Street, but law was conspicuous by its absence. Unfortunately this continues to be the case. The shenanigans in Haldia have been outrageous, and some reports that I have received from North Bengal also point to a situation where we have exchanged old goons for new. Since she obviously does not gain financially from these scams as her predecessors did, I think it is possible for her and imperative for the health of her administration that she puts an end to them immediately.

Another thing that she should curb immediately is her habit of making promises. She has promised tertiary care facilities in all district hospitals. In a situation where even secondary care is difficult to maintain even in major districts, such a promise is meaningless. Her blithe scattering of 500 crore, 200 crore promises also fill me with a vague foreboding. Everybody, including herself knows that she can never pay for all this. So are we in for another round of “ The Centre is depriving us” fun and games? Will Bengalis fall for this as second time? Blaming everybody but themselves for their troubles? I doubt that the younger generation at least will fall for this sort of twaddle, even if it does contain a grain of truth. It is more likely that there will more disruptive agitations which will lead to nothing.

I wonder why our leaders do not realize that what we need the most is a return to simple lawful ways. If we simply implemented all the laws that we have, instead of making new rules and promises every day, there will be a huge difference in the polity and then private investments will do most of the rest. If we cannot repair roads, cannot ensure that doctors attend to their duties, clerks demand bribes for simple day to day transactions, what is the use of ministers and the Didimoni rushing from place to place, promising the stars and the moon? All we want is a piece of earth.

I hope that Mamata will realize that she needs is to bring normal, non partisan, honest governance back to Bengal. If she can deliver on this, the people of Bengal will forever be in her debt.
Mamata Bannerjee Report Card

Anonymous said…
Evaluation is absolutely necessary periodically because we have high expectation from this Govt. but it will be unfair to comment at this moment: Indranil Bhowmick
September 22, 2011 at 5:34 PM

Anonymous said…
There are small signs visible,like roads being swept,that's a start.: Atul Singh Rawat
September 30, 2011 at 10:01 AM

Anonymous said…
She is trying but the people around her are not those who can arouse a feeling of confidence. She should take stern steps against her partymen who are upto putting a black impression. News are coming out and those are constructive criticism. Uttam Dasgupta
September 30, 2011 at 10:02 AM