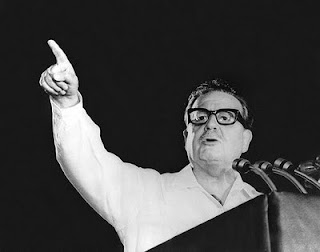 ( This picture of Salvador Allende has been borrowed from Flickr)
There has been an outpouring of sentiment, and rightly so, for the victims of the 9/11 tragedy in New York on the occasion of its tenth anniversary. Islamic militants, sitting in caves and safe sanctuaries in Afghanistan and Pakistan, planned and executed a dreadful plan which led to the death of thousands and has set off some intended and some unintended consequences that have consumed many more thousands of lives and look set to consume many more before the fires are doused.
However of those of us with less longer and less Americoentric memories, 9/11 was the anniversary of one more tragedy, again planned with chilling callousness and for gain in distant offices and executed by local mercenaries. That tragedy, for various reasons, did not achieve iconic status (American lives being much more precious than others), but it still stands as one of the biggest criminal acts ever committed for ideological reasons.
I refer of course to the coup in Chile against the Salvador Allende government. This terrorist act was planned in the air conditioned offices of the CIA, okayed by the then denizen of the White House, Richard Nixon, another crook and well known to us in India because of his infamous attempt to save his clients in Pakistan from the results of their folly in 1971. The coup that they planned and financed killed thousands of innocent Chileans and unleashed a brutal dictatorship that made a mockery of the then ongong cold war against the undemocratic Communist regimes.
Salvado Allende was elected to the Presidency on the 4th September 1970 as part of the Popular Unity coalition of socialist groups. They set in motion policies that were seen as threat to the entrenched economic interests of the elite backed by the beacon of democratic values, the US of A. Initially, constitutional means were used to topple this inconvenient government, but when these failed, and only fuelled more support for Allende, the CIA got into action, masterminding the coup that led to the first 9/11.
Allende died bravely defending his position, and in a few days, Pablo Neruda died. There is much reason to believe that he was killed by the US backed Army forces. The US and its free press tomtommed the victory of Freedom and Chile descended into a hell from which it only emerged after decades.
I sometimes wonder whether the sanctimonious columnists who we have seen in full cry in the past few days really feel that only American or West European lives are important, or have they really forgotten history. Leave them aside, what about our communists? They hold demonstrations and write fiery articles at the drop of a hat. Why did they not even write a letter to any of the Indian newspapers, reminding us of this terrible day?
9/11 has terrible connotations, but they do not all relate to 2001. We should also remember the other 9/11 and pay homage to the victims of American terrorism.