Tales of exile and the partition of Bengal. 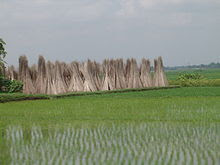 This picture of the Paddy fields of Bengal is borrowed from Wikepedia.

In one of his collection of essays, “The Imam and the Indian,” Amitav Ghosh has quoted Dante from his Divine Comedy as the title of a moving essay on the pain of exile. Not the sort of exile that we face here in Malaysia, , brought on by ourselves, in the lure of a better life or some better working conditions, but of those men and women who have to leave their land and their memories behind as they are forced out of land which they considered their own. The plight of many Palestinians, and nearer home, the Kashmiri Pandits are apt reminders of this terrible fate that can fall on men and communities.
As the Partition generation dies out in West Bengal and wherever the East Bengali diaspora dispersed, the memories of East Bengal slowly fade from our collective memories. Today it is Bangladesh, to our eyes, a land of turmoil and the source of a never ending mass of refugees who flee what was till the other day, at least in the collective imaginations of those who had to leave it, a land of milk and honey.
To those of our generation, born safely in West Bengal, but possessing relatives who had to leave the eastern part of Bengal during partition and afterward, these lines strike a chord. All my maternal relatives were from the East and had to leave their native soil. Some managed to sell their lands and got out before things became really bad. Others were forced out later fleeing with little but the clothes on their backs. It is politically incorrect nowadays to remember those days, and to tell the truth about the torture inflicted on innocents. However, I do not remember any bitterness in the recollections of my grandparents and others as they talked of what they had left behind. They however mourned the green fields, the rivers and the Chandi Mandaps of their native villages; not for one day, or one month or one year, but as a constant refrain throughout the rest of their lives.
The story of their suffering has been recorded in literature and some marvelous films, but the silent pining for the scenes of their childhood, adolescence and youth has, to my mind never really been recorded; and now, perhaps never will.
Perhaps that is all for the best, there is no use recalling past glories unless you are willing to do something to revive them. We Bengalis have been justly blamed for a nostalgia for the past that far exceeds our desire to do something in the present. However reading of the pain of exile of other peoples reminded me that in our lifetime, our people suffered a pain that was terrible and unexpected. Till the mid sixties, many lived in the hope that it was somehow reversible, but after the 1965 war, the hope died. When Bangladesh became independent not long afterward, and this again evoked the memories of a common language and common heritage, the bond was gone forever, I do not think anybody was too keen on reviving past associations, except as citizens of India.
One of the best evocations of that longing that prevailed in the fifties and early sixties was, of course, Annada Shankar Roy’s famous poem, “Teler Sishi Bhanglo Bole” later sung by Bani Ghoshal to Salil Chowdhury’s music. You can hear it here and perhaps shed a tear for the Bengal our fathers lost.

Swapan Kumar Sen said…
"There is no greater sorrow
than to recall our times of joy
in wretchedness". I realize what it means to one in exile,either forced or self-imposed.

I have never been in Bangladesh. Yet I am a bit familiar with the country from where my grand-parents were exiled. I used to listen with rapt attention to the tales of Purba-Bangla, the house of Lakshmi Bazar in Dhaka, the village Palong, Dhaka Normal School, where my grand-father was the Head master, as told by my Grandma with an audible sigh while reminiscing the joyful past. We have learned not to live in the past and but the tales I heard keep coming back to me again and again.
September 2, 2011 at 2:10 PM