Evidence Based Medicine: the origins 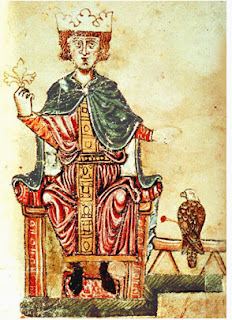 Frederick II, Holy Roman Empperor
Evidence based medicine is all the rage now and randomized controlled trials are a dime a dozen. All self-respecting clinical researchers are jumping into the RCT pit with gusto. However, I wonder how many of us know when the first recorded attempt was made to elicit evidence for clinical practice?
Frederick II (1192-1250) was the Holy Roman Emperor and the king of Sicily. This was the thirteenth century when medicine was still more magic than therapy. While he was the most powerful medieval emperor of Europe, he had scientific interests in addition to his military abilities. He wrote a treatise on falconry and set up a menagerie which collected all manner of exotic animals. Emperor Frederick was interested in knowing the effect of exercise on digestion. There were two schools of thought extant at that time in his court. One set of physicians felt that exercise was good for digestion while a second lot swore that resting was better. Frederick was a scientific sort, he simply called up two of his knights. Both were fed identical meals and one was sent to sleep it off while the other was sent to hunt. At the end of several hours he had them both killed and had the anatomists examine their stomachs to see how far the digestion had progressed. History has recorded that the sleeping knight had proceeded further in digestion than his compatriot who had gone hunting. They were not the first, and certainly not the last to sacrifice themselves, or to be more precise, be sacrificed for the better good of Science. 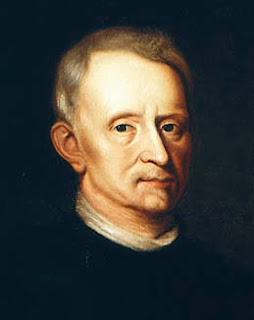 van Helmont
Another issue that exercised the minds of many physicians was the practice of bloodletting. This was ubiquitous even up to the early twentieth century (and in fact is still used in some selected cases today).
However the practice of using bloodletting as a treatment of everything and anything had raised doubts among some physicians even as early as the 17th century. Jan Bapista van Helmont, a Flemish physician and chemist, physiologist and philosopher proposed what was almost certainly the first clinical trial . Incidentally he founded the field of pneumatic chemistry and his interests ranged widely from chemistry to philosophical questions and of course to his first love medicine. He proposed taking 200 to 500 poor people, dividing them into two groups by casting lots ( randomization, in other words) and protecting one group from the phlebotomists while the second group was allowed to be submitted to the tender ministrations of physicians who could blood let if they thought it necessary. He suggested that the number of funerals in each group would be an excellent way to decide which group was better off. Unfortunately or fortunately for the subjects, this experiment was never carried out. No one really seems to know why.
So Evidence based medicine ( EBM ) had its origins in the hoary past, and not as we think , in the last two decades of the last century!

( all pictures from Wikipedia)
EBM history