May 23, 2014
Lorna Monteith is an old friend. She has written in this blog about the Bow Barracks ( see here). She, too , is a heroine in her own right. I will post her story sometime later, but for now lets read a eye witness account of the Great Calcutta Killing.
Incidentally, the Great Calcutta killing was one of the most horrendous riots that occurred on the eve of Independence. The Muslim League gave a call for Direct Action to obtain Pakistan which led to large scale disturbances with Muslim mobs, with the tacit support of the British Government attacking Hindu localities. The reprisals were even worse than the actions and there was great orgy of killing which ended only after a week when the British masters realized that things were getting out of hand.It was one of the biggest failures of the British and combined with the Bengal Famine and the Partition, made the forties probably the worst decade of the twentieth century for Bengal. 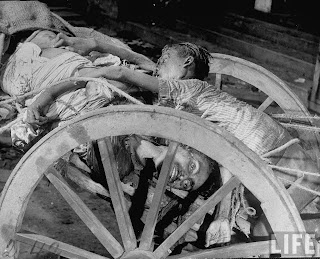 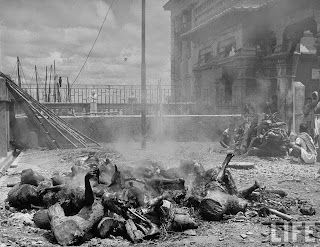 All pictures from the website " The Old Indian Photos"
Lorna was an eyewitness to this gory event. This is how she remembers it.She is Anglo Indian, so this is from her perspective which most likely mirrors how that community saw the riots

" I must have been about 8 or 9 years, because my mother died in 1947, the year India got it's Independence, when I used to stand on our Balcony on Temple Street where we lived, and watch so much killing down the Street. The area we lived in had Muslims and Hindus whom you might say were neighbours, but they were pulling them out of the Chandni Market where they used to make gunny bags, and stabbing them time and time again and then throwing their bodies on a hand cart, or in the filthy manholes. Some of them were still alive. I remember seeing these bodies piled on the hand cart and as soon as it rained, some of these poor people who hadn't died just happened to move when they were finished off. It was so sad because no one could do anything to help them. Then down near our side, men hand machine guns and were just shooting aimlessly, one person we knew who lived in a bustee was shot in the leg. Of course, the Christians were not touched but if any of the Anglo Indians were caught harbouring anyone, even our servants, they would beat them up. A lot of Indian Christians painted a Cross on their gates/doors. I can still remember our parents reading in the Newspaper of killings in various parts of Calcutta like women who were pregnant had their stomachs ripped open with a knife and told to eat their kid. It was all very cruel. Then when India got it's Independence, the Anglo Indians were being attacked and insulted i.e. being told to take off their ties or hats if they wore one, and stood on them, and the women were told to wear Saris. There is nothing wrong with wearing a sari but it was not our National dress. This is only because the people of India felt we were the left-overs of the British people. It was scary for the Anglo Indians at the time. There were a lot of Anglo Indians still employed in the Police Force and all these insults and attacks were soon stopped by the Calcutta Police. Thank God. "