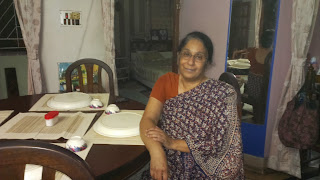 We often talk about heroes, the pages of Facebook are rife with many imaginary stories of heroism. However, in life you do sometimes come across people who are heroes and heroines; ordinary people, just like you and me who have overcome trials and tribulations bravely, silently and have emerged triumphant.
I would like to tell you the story of one such heroine. She is the sister of one of my closest friends and her story can be really inspirational. Sumita Bannerjee was born in Nagpur, the daughter of a schoolmaster. She was brought up in an ordinary middle class Bengali home where education was more important than luxuries and she received a good formal education. She began her working life as a teacher in her hometown and as is very usual in such families in those days, had an arranged marriage to a bureaucrat in the West Bengal government in 1983. So far, her life was ordinary, even humdrum you might say.
The first real setback to her existence came when she had an ectopic pregnancy which led to emergency surgery in order to save her life. Subsequently she lost a pair of twins who were born prematurely. This would be enough for many people to become psychological wrecks, but not Sumita. She overcome this and had a daughter in 1989. Life again settled down to a groove; the daughter grew up, her husband was promoted steadily and they moved into a new house in Salt Lake.
The first intimation that things were not likely to stay smooth was a small lump that she noticed in her left breast, one day early 2000. The investigations proved it to be a malignancy and she was operated and underwent later chemotherapy and radiotherapy. It was at this time that she proved that she was made of stern material. She faced the issue squarely, discussed the options and decided to undergo surgery and following it all the adjuvant therapy. As is usual after chemotherapy, she lost her hair , lost weight, and had all the other complications that are usual . All this she bore uncomplainingly. I had by then moved to Pokhara, but I was kept in the loop and whenever I met her during our trips home, it was difficult to believe that she had undergone so much; she was as cheerful as ever. Her only fear, which she confided to her sister, was that she wanted to ensure that her daughter should grow up a little more before anything should happen to her. As the growth had spread to the axillary nodes, there was some apprehension about the long term prognosis, but in this case, God looked after His own and she remained disease free and still is. I guess she has been cured of the breast cancer. She became what is today called a cancer survivor. But fate had more in store for her.
The year was 2005. It was my friend’s son’s marriage. The first marriage of that generation in their side of the family, it was a huge celebration, where the entire family and large numbers of friends, of whom we were also included, attended. It was during the boubhat ceremony that her husband, Asim suddenly had a fit. He recovered after first aid and the ceremonies were not interrupted, but the later investigations proved it to be a rapidly growing mid brain tumour which was inoperable. I remember accompanying him back from the Park Neuro Centre to a Salt Lake Hospital where he was shifted when the prognosis was proved to be very poor. He died a few days after this in late May, leaving a widow and a daughter who had just passed the ICSE. She too is a heroine in her own right.
Monti, as we know her, was a typical housewife. She loved her home and spent all her energies in keeping a lovely home. Incidentally she is marvelous cook as well, as I can testify. It was difficult for those who knew her to imagine that she would be able to take the reins of the household in her hands so expertly, ensure that her daughter got the best education possible, admit her to study in the Delhi School of Economics and take her to Delhi to set up the logistics of her stay there as a paying guest. Her daughter reciprocated by graduating at the top end of her class and is now working In Bangalore, doing very well indeed.
If you thought the story ended here, you are mistaken. In 2011 she started having abdominal pain which was initially thought to be appendicitis. On investigation this proved to be yet another cancer, this time in her right kidney. Far from breaking down, she again faced it squarely, underwent major surgery to remove the kidney and is now following up. Hopefully she has beaten the crab twice in one lifetime.
Monti lives quietly in her home in Salt Lake. Nobody who sees her would ever dream of the drama and the struggle that she has undergone. She visits her daughter for fairly long periods but her heart is in Calcutta. She is the quintessential heroine who has overcome all odds.
She deserves to have a movie made of her life. She is an inspiration to all of us who know her.