The Poet and the Sannyasi 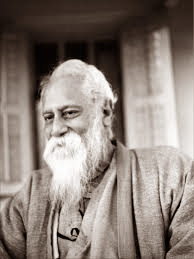 Two of the greatest icons of pre independence India who still wield immense influence over the minds of Indians of today were born within a couple of years of each other barely a kilometer or so as the crow flies in the city of Calcutta, then the capital of the British empire which seemed destined to last a thousand years.
I refer, of course to Rabindranath Tagore and Vivekananda, one the poet philosopher who was, as Amit Ghosh once put it, the first global literary superstar and who was the conscience keeper of the Indian independence struggle. The other was the person who interpreted Hinduism in a way that many had not for a thousand years away and set up a Mission in the name of his master which is till today one of the biggest and most important educational and service organization in the country.
It is surprising therefore to find that these two savants barely acknowledged each other’s existence and there is only one unequivocal record of a meeting between the two. Tagore was skeptical of the claims of the formal Hindu religion, the sanatan religion as it were, while Vivekananda felt that Tagore was not a good influence on the youth of India. This seems preposterous but is true. 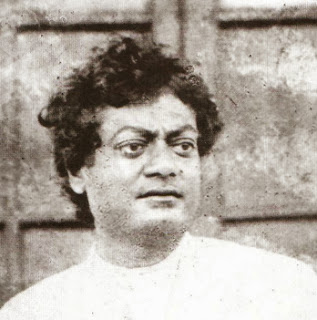 It has been speculated that they may have met at maghotsabs organized by the Brahmo Samaj in the days before Vivekananda became a sannyasi. Naren Dutta attended these, it is known, and so did Tagore. It is known that Vivekananda occasionally sang Brahmosangeets composed by Tagore, and it is quite possible that they had met, but there is no record of this.
In later life, when he was the world famous sannyasi who had taken the Western world by storm and Tagore was the uncrowned king of Bengali letters, there is just one documented meeting between the two. The connection between the two men was Madeline Slade, Sister Nivedita.
The year was 1898. Miss Josephine Macleod, who had been attracted to India by the influence of the Swamiji, was the guest of The American Consulate in Calcutta. It was at this time that Nivedita returned to Calcutta from a North India tour and came in contact with the Brahmo group through Miss Macleod.
Swami Vivekananda encouraged this contact. He asked Nivedita to “make inroads into the Brahmos”. In a letter to Miss Macleod in January 1899, Nivedita said “Anyway he told me to get up a tea party and invite all my Brahmo friends and he would come and talk”. And that is what she did. The famous party was arranged on the 28th January, 1999, a Saturday and she invited a glittering company, chief among whom were Rabindranath, Dr Mahendralal Sarkar, Sarala Tagore and several others. Swami Vivekananda was, of course, present as well. Nivedita records that the poet sang several songs and recited some poems and the “Swami talked magnificently”. However she records: “there was some cloud-I could not tell what”.
Significantly, neither the poet nor the Sannyasi ever mentioned this meeting in any of their prolific writings.
Incidentally, Swami Vivekananda was very impressed with Sarala Devi and wanted her to participate in spreading the word of Hinduism in the West. Nothing came of this, however.
Vivekananda later met Debendranath, Tagore’s father several times, but never the poet again. In fact in a letter Nivedita has recorded that The Swami was not much In favour of her keeping in touch with Tagore. She recorded that he said “Remember that this family has poured a flood of erotic venom over Bengal”

There is a tradition that after the Swami’s death Tagore wrote to Roman Rolland who was researching his life in order to write a biography about the swami. He is reported to have said “ If you want to know India, study Vivekananda. In him everything is positive and nothing negative.” Unfortunately later scholarship has shown that he did not write this letter at all. The story was apparently made up by an early biographer of the Swami and copied by subsequent writers. A discussion on this issue can be found here.
It is a pity, but apparently the two of the greatest Indians who lived contemporaneously did not share good opinions of each other. But fortunately since there were no media circuses then, decency prevailed and none of them said anything publicly to the detriment of the other either.